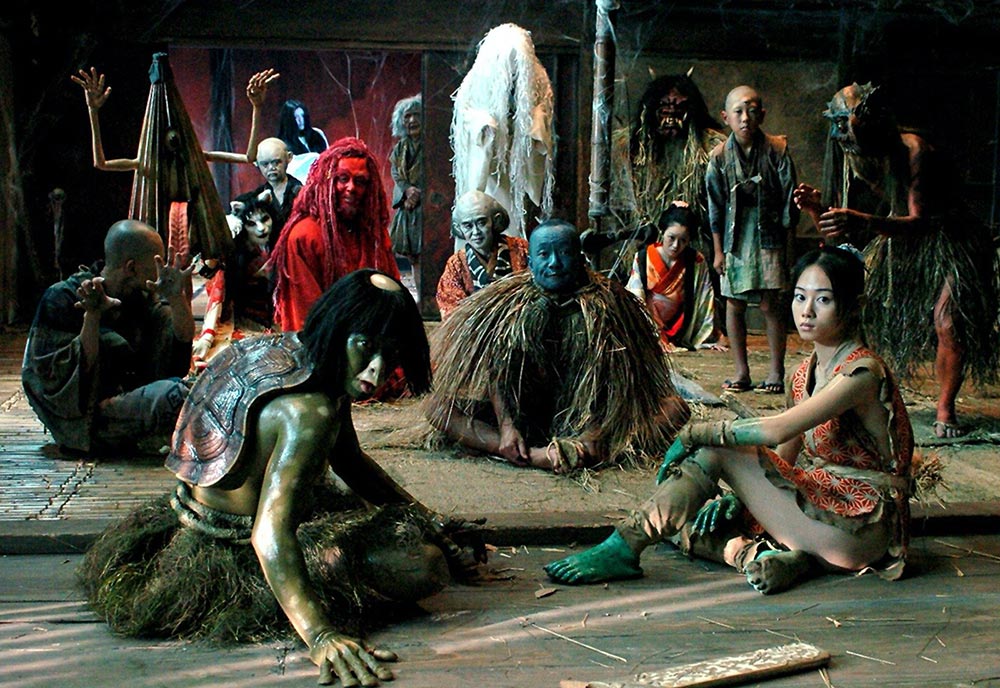 Sandwiched between Takeshi Miike’s most notorious, taboo-prodding works of sex and hyperviolence (Ichi the Killer, Visitor Q) and the period samurai films that brought the director more mainstream acclaim (13 Assassins), is, ostensibly, a children’s film: The Great Yokai War (2005).

Loosely based on the 1968 Daiei film Yokai Monsters: Spook Warfare, Miike’s The Great Yokai War tells the story of a young boy, Tadashi, who moves from Tokyo to a small town after his parents’ divorce. At a local festival, Tadashi is chosen as the Kirin Rider — a sword-wielding champion who is prophesied to bring peace to the land — and subsequently befriends a gaggle of spirits and monsters called yokai. The mostly lovable and dopey yokai are threatened by the malefic, occult villain, Yasunori Kato, who seeks to fuse the creatures with the resentful spirits of thoughtlessly discarded objects (shoes, a motorbike, etc.), transforming them into horrifying mechanical monsters. It’s up to Tadashi to stop Kato with the help of an army of wild and wacky yokai.

The yokai are imaginative creatures from Japanese folklore that became a popular subject for ukiyo-e artists during the emergence of mass printing in the Edo period (1603-1868). In the modern Showa era (1926-1989), the yokai evolved into friendly, heroic, and comical characters in manga and on screen, and it’s from this template Miike draws his characterizations — the grouchy kappa (a Moe Howard-esque humanoid turtle), the melancholy nurikabe (literally just a wall with eyes, arms and legs), and the lovable furball sunekosuri.

The staggeringly prolific Miike has always been a cinematic chameleon, but the shocking nature of much of his work can easily distract from the assured elegance of his craft. The balancing act Miike achieves in The Great Yokai War is on par with any big-budget fantasy film, and the comedy he finds in the yokai is refreshingly contemporary. Miike’s yokai want to party, and they save the day by showing up just in the nick of time to crowdsurf and rush the stage, treating the final battle more like it’s Warped Tour than D-Day. All this goofiness is poignantly juxtaposed with a question though: what do we leave behind when childhood ends? In Miike’s estimation, innocence and imagination. But before we’re forced to “clock in” to the adult world, there’s fun to be had, and as Kawataro the kappa tells Tadashi, “Every kid dreams of a summer adventure,” and Miike gives us just that.

The Great Yokai War is part of Japan Society & the Agency for Cultural Affairs's 21st Century Japan: Films from 2001-2020