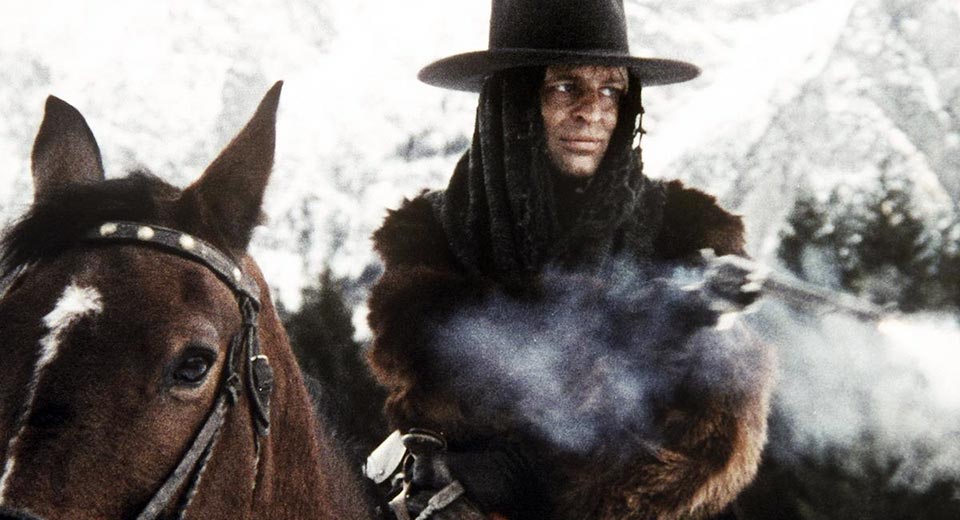 What turns out to be most memorable in Sergio Corbucci's outrageously violent 1966 western Django is not its climactic comicbook machine gun massacre, but the film's unrelentingly dreary setting and tone. The streets where Franco Nero drags his coffin are filled with mud and the townspeople wrap themselves in dark coats and scarves to protect against the harsh winter. Living, or more accurately, surviving, isn't easy in the landscape Corbucci creates. His west greedily sucks human comforts and hopes like oysters and spits the shells back in the viewer's face.

The Great Silence (1968), now in a revival run at Film Forum extended until April 10, doubles down on Django's bleakness. The weather is even more oppressive, and the over-the-top violence is replaced by an unflinchingly sadistic brutality. Vulnerable bodies move through the film's snowy landscape with awful effort not unlike Cut-Throats Nine (1972) or McCabe & Mrs. Miller (1971). Corbucci's movie, however, wrings more metaphorical mileage from its unforgiving setting. The attempt to do what is right is stymied by the world's thick membrane of corruption and savagery, and the weak are destroyed by the strong. Morality is lost in a blinding snow.

Jean-Louis Trintignant gives one of the most fully realized performances ever seen in a euro western as a mute gunfighter. He is not Eastwood's resourcefully nihilistic opportunist or Nero's steely eyed superhero, but a fragile protagonist tormented by his past, who we don't quite believe will triumph.

In the film's most shocking and beautiful sequence, Trintignant's character is tortured. He opens his mouth and screams in silence. This is more Bergman than Leone. In the end, the silence we hear is not that of our mute protagonist, but the silence of an empty place within humanity where goodness once lived and of empty heavens. This is the western at its darkest.