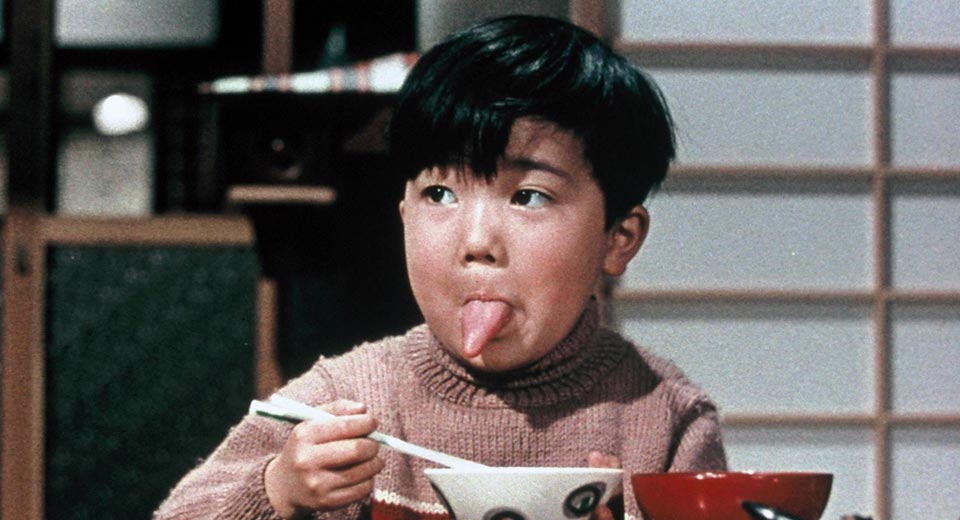 Like Charlie Chaplin with sound, Yasujiro Ozu came comparatively late to color. But, similar to Chaplin, when Ozu finally made the switch (in 1958 with Equinox Flower) it was clear that he had already grasped, and mastered, the new medium's possibilities. Good Morning, the film he released after Equinox Flower, is the single best example of how intuitively Ozu understood color and composition; how seamlessly he could experiment with both while still telling a story.

The film's plot revolves around a small neighborhood where families live side-by-side in brand new, pre-fabricated houses. It is a post-war world, where the men work in office buildings, while their wives mend clothes, prepare dinner, and try their best to keep their children (all boys) from sneaking off to watch the TV-set that belongs to the only young bohemians in the neighborhood. There are problems—like underemployment, and retirement, and marriage; some families can buy new appliances outright, while others pay for them in installments. But, in this Ozu film at least, no one dies, no families are torn apart, and no one's dreams are explicitly crushed.

This world was Ozu's home ground. Not only because it is defined by the kinds of workaday melodramas that he returned to again and again, but also because it is a world filled with objects, which Ozu arranges with a precision that was unique to him. In nearly every shot there is a green kettle, or a blue bowl, or an orange scarf, or a pair of candy-colored dressers; and each color, in the shape of an object, fits perfectly into the geometric space of the Japanese home. The overall effect is obvious. Everything looks balanced and in its right place. But what this particular kind of visual perfection does—how it makes us feel—is ambiguous. The plot has its moment of melancholy and its moments of laughter, which we feel, and we react accordingly. But, there is something else at work that is harder to name. We can see what it is, how the green kettle sits on top of the rice pot which sits on top of a table in a quiet police station. Aesthetics or Beauty are only awkward synonyms for the thing itself, the images—which are each, individually, filled with the same level of detail as a complex painting or a photograph. But how do we describe what it is that a photograph is doing, or a painting? Ask the same question of Ozu's film; there is no clear answer.