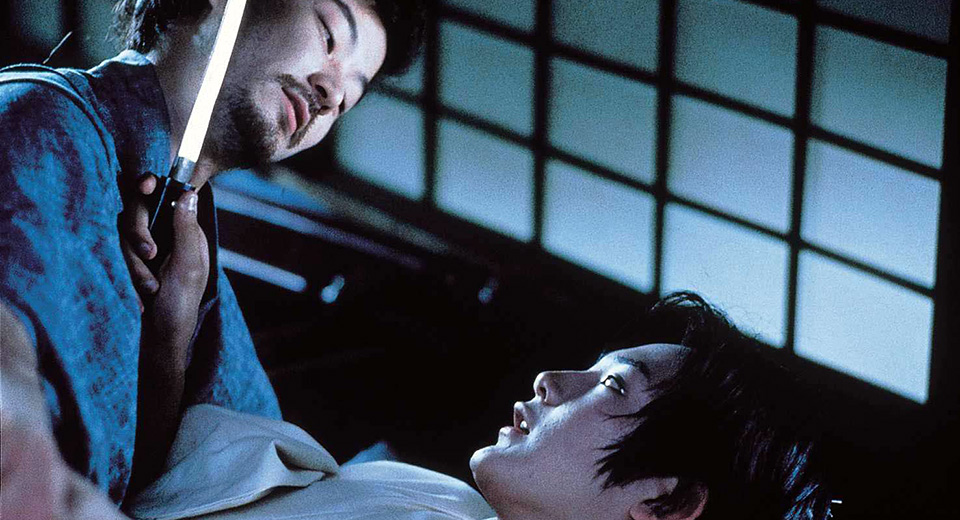 The samurai — at least in the imagination of the Western laity — is defined by unyielding dedication to his code of honor. In Gohatto, Nagisa Oshima’s final film, lust destabilizes that righteousness within a cadre of samurai. In the face of sublime beauty and the body’s urges, their communal rectitude dissolves to confusion, death, and bliss.

At the center of the maelstrom is talented swordsman Sozaburo Kano (Ryuhei Matsuda), a teenager of ethereal, androgynous beauty. Once admitted to the 19th century Shinsengumi (a fighting force established to prevent the overthrow of the shogunate) Kano draws the attention of his comrades for his deadly skill as well as the perfect innocence of his face. Some are overwhelmed by lust and attempt seduction. Others speak about him elliptically as if sublimating their fascination in real-time. His near-equal in violence, Hyozo Tashiro (Tadanobu Asano), entwines their professional competition and sexual desire. For his part, Kano is largely silent and remains as mysterious to audiences as he is to his brethren. It is clear he is attracted to men, but their obsession with him is far stronger. He is enchanter or naif, perhaps both.

Far from a pitying psychodrama concerning forbidden love among violent men, Gohatto is instead interested primarily in the disruptive force of lust and its proximity to death. Homosexuality is discouraged and often mocked by various characters within and without the Shinsengumi, but Oshima does not depict the stigma as deeply coercive. It is instead an open secret, more likely to prompt giggles than punishment. It’s not the perceived immorality of gay sex that drives the film, but an inscrutable beauty that inspires the loss of control.