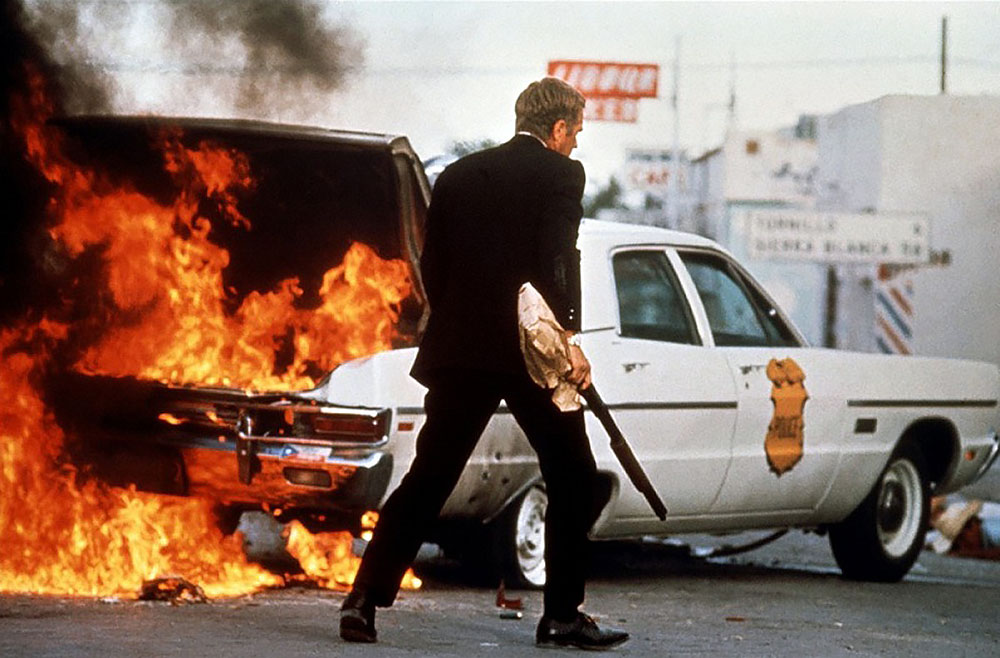 In The Getaway (1972), Jim Thompson‘s postwar fatalism is transposed to the 1970s, when the gloom temporarily banished by the 1960s returned with a vengeance. America is a frontier again, ruled by money and violence. Gone are the previous decade’s utopian fantasies and exuberant sense of possibility. “Reality” is back, in the cynical sense of the present order of things.

This is the world that greets Doc McCoy (Steve McQueen), paroled after doing four years for murder and armed robbery. The opening sequence—electronic gates, heavy machinery, hardened faces—portrays prison as a machine for churning out misfits. (“It does something to you in there.”) Recidivism is guaranteed, and the guards know it: “You’ll be back, Doc.”

The Getaway is part classic 70s heist thriller (Quincy Jones’s frenzied score is packed with flutes, trombones, and hi-hats), part sober stock-taking of the meager opportunities that decade offered. McCoy starts to recover with the help of his wife (Ali MacGraw) but quickly falls back into his former bank-hitting routine alongside a couple of loose cannons. An itchy trigger finger turns a piece-of-cake robbery into a murder scene, forcing McCoy to ditch his partners. The rest is straightforward couple-on-the-run, like Bonnie and Clyde with less glamour or They Live by Night with less empathy.

The best character appears last: Slim Pickens as a law-flouting trucker who gives the fugitive couple a lift across the border for a sum four times his annual income. He’s the voice of the weary American everyman, “tired of this God-dang world” without morals, breaking his back for a pittance and totally devoted to his wife. In Peckinpah’s bleak dog-eat-dog world, this final gesture of solidarity between victims of the same system (“Shoot, I’ve been in trouble with the law too”) restores a glimmer of hope.