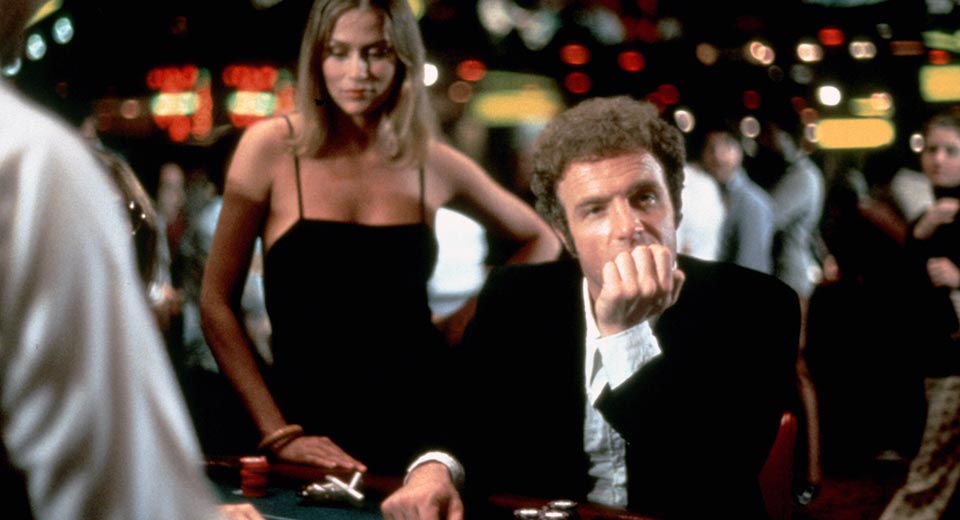 Karel Reisz’s gritty, naturalistic New York drama The Gambler (which plays as part of the Museum of the Moving Image’s Caan Film Festival with writer James Toback in person), falls into the former category. In many ways it resembles Wilder’s Lost Weekend with its charming, and incredibly frustrating, protagonist, who is clever and seemingly self-aware yet unable to veer from his self destructive trajectory. Both films are largely subtle psychological portraits that bring the viewer into the lonely world of the addict on his terms, following the mundane rituals that structure his addiction in unflinching detail.

The Gambler takes Wilder’s film and brings it into the age of raw, naturalistic dialogue, adding Toback’s trademark literary and musical touches. In this way, The Gambler resembles Toback’s 1978 film Fingers in which Harvey Keitel, who plays a low level enforcer, straddles the symbolically transcendent world of classical music and thuggish violence and sex. James Caan’s character also straddles two worlds, the university classroom and the dark dens of illegal gambling and the backroom offices of bookkeepers and loansharks. This duality is elucidated and complicated by the philosophical underpinning of Caan’s addiction.

In his role as an English professor Caan, who is brilliantly restrained in his role as the self destructive all-grown-up prep school kid in contrast to Burt Young and Paul Sorvino’s humanistic hoods, expresses a preoccupation with the existential monkeywrench of free will. At first glance this philosophical dimension seems to point toward Caan’s gambling as experiment in free willing and chance. As the film continues however, the line between consciously self-destructive philosophical project and uncontrollable pathological behaviour become blurred. The result is a realistic, poetically resonant and subtle portrait of moral degradation and salvation which resembles Robert Bresson’s powerfully transcendent masterworks about the light in even the dirtiest of souls as much as it does Scorcese’s naturalistic, catholic guilt-ridden confessions.