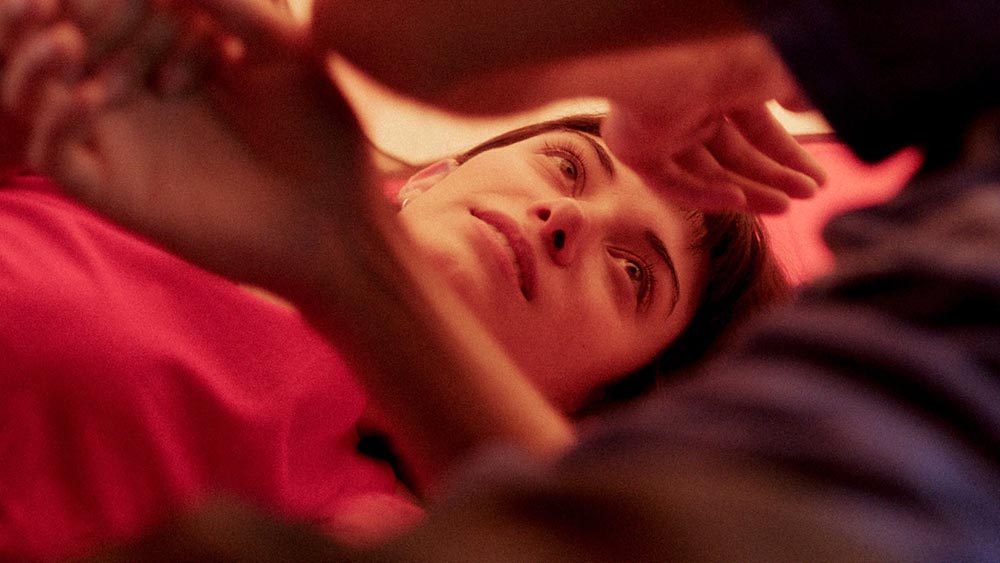 Staring at a portrait of Queen Elizabeth, Ray (Fergus Wilson) asks, “Did that painting change color?” It’s late in James Vaughan’s first feature, Friends and Strangers (2021). Right now the queen’s coat is blue, but could it have been purple earlier? Despite the uncertainty it elicits, this exchange also brings clarity to something we’ve been feeling all along—that the pervasive strangeness throughout the film’s representation of everyday Australian life may come not just as a reflection of the characters’ inner states, but may also extend to the physical world around them. This sense of something always off-key pervades the lives of the various characters as they bump into each other across the film, even while they seem both unwilling and unable to articulate it.

We first meet Ray chatting listlessly with Alice (Emma Diaz), a friend of a friend with whom he is somewhat physically involved in ways neither of them are ever really clear on. As they move from one undefined situation to another, their vague coherence as a couple only further disintegrates. “What is it that we are taking slow?” Alice asks Ray after failing to engage him physically, throwing into further confusion the proliferating ambiguities that define their conversations and interactions.

True to the title, this is a movie about friends and strangers—people who may only sort of know each and certainly lack any of the intimate and earnest dialogue of lovers—and every interaction is filled with small talk defined by awkward miscommunications and circular repetitions reminiscent of Hong Sang-Soo’s work. When Ray gets stuck in his employer's house, Vaughan takes the comic impossibility of basic communication to brilliant heights. Ray is accosted by his boss’s asinine questioning (“Would you agree that videography is the art of illusion?”) and semantical bickering. At one point the phrase “hill of beans” is repeated into gleeful absurdity, and the film’s previously bemused, cryptic aimlessness turns to a frantic, Beckettian form of semi-nonsense.

“If you don’t deal with things properly, that’s when they become haunted,” Ray’s friend tells him, referring to a recent breakup yet possibly connoting something larger. Vaughan has talked about how part of his aim was to convey the structuring absence of indigenous culture in post-colonial Australia. Opening on watercolors by William Bradley, a British Naval officer in the First Fleet of Australian colonization, and closing on a title card acknowledging the Indigeous land rights to the film’s locations, the film is haunted by the specter of colonialism. Vaughan enforces this tension with his decision to work in entirely static shots composed in a sharply-angled, formalist manner, reinforcing both our sense of aesthetic estrangement and the dividing line between the white upper-middle-class lives we see and the Indigenous worlds that lie off-screen.

Friends and Strangers screens tonight, February 25, through March 3 at Metrograph.