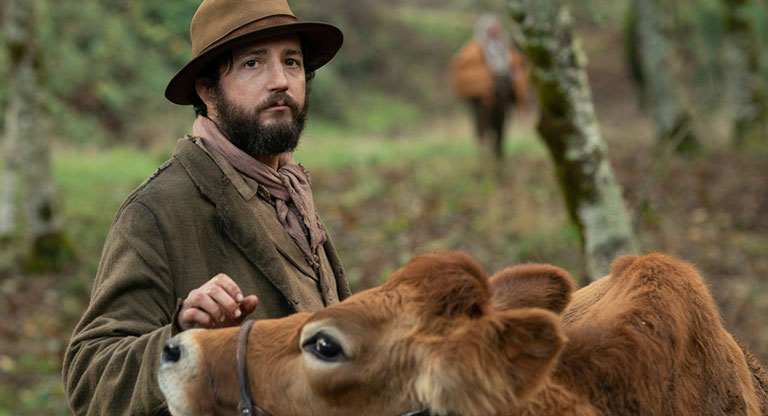 First Cow’s roots in the rhythms of male friendship will call to mind Kelly Reichardt and novelist/screenwriter Jonathan Raymond’s first collaboration, Old Joy (2006). Set in 1820, this loose reworking of Raymond’s novel The Half-Life charts the bond between Cookie (John Magaro), a cook traversing the Oregon territory with a group of buffoonish fur trappers, and King-Lu (Orion Lee), a Chinese immigrant on the run after avenging a close friend’s murder. When Cookie meets King-Lu cowering naked in the brush one night, he hides him in his luggage to transport him to the safety of the next trading post, an act of kindness that leads to a wholesome reconnection a few years later—and a scheme to make some extra cash by baking buttermilk scones. Since resources and freshly-cooked comforts are scant, the pastries inspire a culinary fad, but their rare ingredients require secretly milking a wealthy British expat’s (Toby Jones) cow, “the first in the territory.”

Through this neorealist setup, Reichardt frames westward expansion as a story of capital, which helps her drain excessive sentimentality from the film’s tenderness: decency seems a poignant triumph over greed. First Cow’s period setting invites a comparison to the Coen Brothers’ recent take on the mythos of the frontier, The Ballad of Buster Scruggs (2018); their anthology film, comprised of six thematically interlocking 19th-century stories, trains an angrier, zanier, and wearier eye on the moral bankruptcy fueling American archetypes and Westerns at large. Reichardt’s fluency with atmosphere lets her filter themes through the detailed fabric of the trading post: a ramshackle stop along the way to one’s uncertain fortune. She renders the traders’ petty self-interest with a dry sense of humor—a scrappy fistfight is a typical salve for a bruised ego—but lingers on the meticulous manual labor needed to stay afloat. Even if Cookie and King-Lu’s baked goods are first and foremost a hustle, Reichardt emphasizes the precious warmth that they bring to their community, who are often reminded of their faraway homes by the soothing taste. At the film’s most macro, and quickly sketched, an altruistic redistribution of bourgie dairy contrasts with a self-serving entitlement behind Manifest Destiny: a droll scene between Jones, his wife (Certain Women’s Lily Gladstone), and a Native American chief (Gary Farmer, a smidge underused) stages a lost-in-translation interaction between the white settlers and the groups they have displaced.

Reichardt dedicates the film to the landscape filmmaker Peter Hutton, and her prologue suggests human impermanence within a durative wilderness: in the present day, a woman (Alia Shawkat) and her dog come upon a pair of buried skeletons, laid next to each other like twins. This inevitable endpoint may hang over the film, but it could also be a matter of perspective, as Reichardt marvels at the small fact of this togetherness enduring two centuries later.