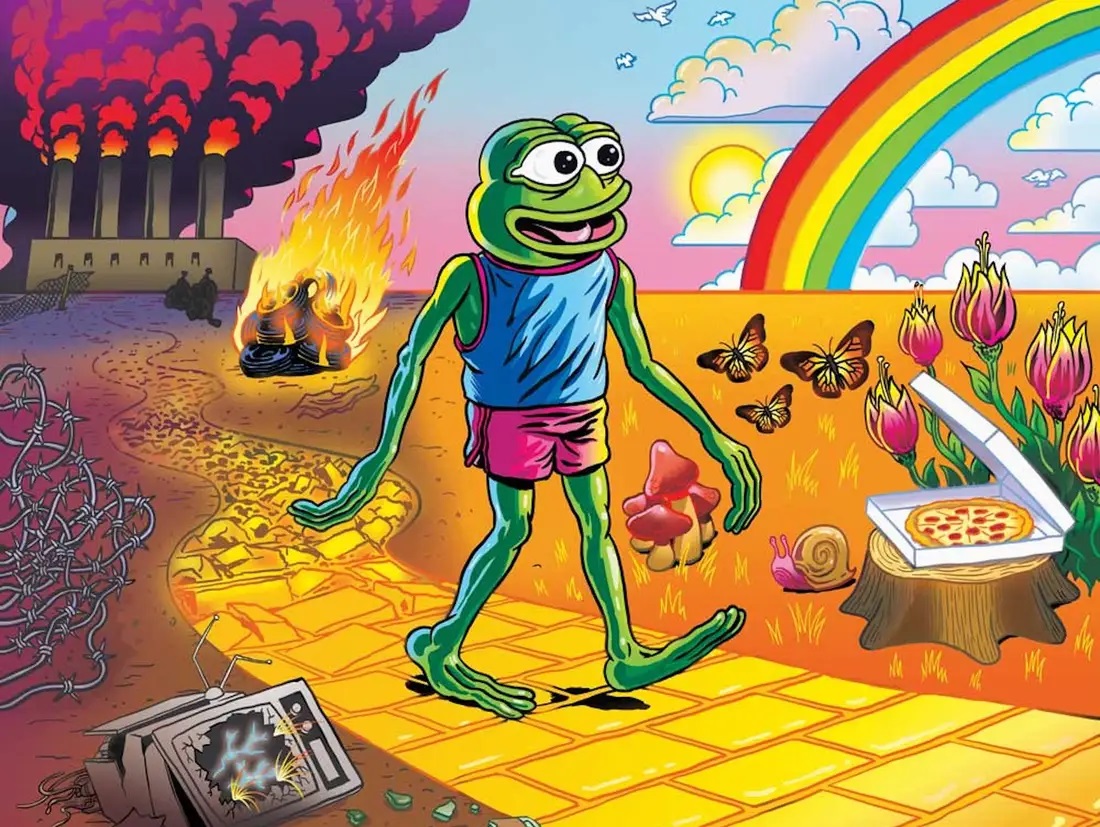 Earlier this week the Biden-Harris campaign released a selection of official campaign signs for Nintendo’s playful island life simulator Animal Crossing, a move that drew fast comparisons to Hillary Clinton’s “Pokémon GO to the polls” remark from the 2016 campaign. Biden-Harris’s Director of Digital Partnerships described the move as leveraging “a dynamic, diverse, and powerful platform that brings communities together from across the world,” something that may sound good enough in theory to justify a campaign salary, but mostly works in furtherance of Democrats’ glaringly cringey inability to connect with a constituency that increasingly lives online. Considered alongside Bloomberg’s hiring FuckJerry for sponsored posts and mega-donors funneling money into the creative agency-styled “anti-PAC” Acronym, establishment liberals have been utterly clueless to rival the tireless, self-organized-and-incentivized meme machine backing Trump and the far-right’s power grab.

No figure exemplifies the later more than Pepe the Frog, who went from an obscure mid-aughts alternative comics character seen in print and on MySpace, to an unlikely internet phenomenon, to placement on the Anti-Defamation League’s hate symbol database near the end of the 2016 election cycle. The new documentary Feels Good Man tells Pepe’s story by focusing on its manifestly chill and kind creator, artist Matt Furie, and the horror of seeing his character appropriated in furtherance of un-chill and unkind political movements. The filmmakers are keen to balance both the micro and macro threads of Pepe’s story: on one hand the personal loss and redemption arc of Furie’s artistic creation, and on the other, the vast and multifaceted phenomena of memes and online culture. For the most part, Feels Good Man does an excellent job weaving these together, more or less departing from Furie during its second act to explore Pepe’s role in the intersecting racist, antisemitic, and misogynist troll cultures that propelled him to the status of Trump’s “invisible running mate,” as interviewee describes him.

The delightful phrase “feels good man,” uttered by Pepe in a comic in which he pulls his pants and underwear down completely to do a standing #1, initially appeared in online male bodybuilding forums alongside users’ status updates. This eventually took on wider prominence and the association of the Pepe image itself on the 4chan message board, where it became, alongside the wojack character, a vessel for for the feelings, frustrations, and grievances of a largely isolated white male constituency who found community and creative fulfillment in mutual meme-making, trolling, and shitposting. As the Trump campaign’s Director of Strategy and Data describes them in Feels Good Man, they identified as a “rebel group” who had no power, no influence, and no connections — but found joy and purpose in trying to push their creation further into the mainstream. Liberal media and politicans stumblefucked their way into fully playing into this effort, pulling Pepe from the fringe internet into the limelight by reinforcing the degree to which the character had become associated with the anti-semitism and white supremacy (direct or ostensibly ironic) that 4chan users and their ilk projected ont it — legitmizing this interpretation, and handing them a major win and a bar to strive to push further.

All this is folded into Furie’s personal journey, which discusses the genesis of the character in his Boy’s Club comic, whose denizens were modeled after the artist’s own circle of friends. Pepe, it may not be shocking to learn, is the one with whom Furie most closely identified, and the viewer can’t help but imagine the extreme trauma of seeing a DIY creation with which one’s personal identity is inextricably linked appropriated by toxic trolls. Furie’s response is tied up with a number of variables; on one hand, lack of resources or personal bandwidth to do much about it, on the other, his feeling that “I’m an artist, I don’t want to sue other artists.” At one point, he kills off the Pepe character, which only furthers the perception that it no longer belongs to him.

Eventually he decides to pursue legal remedies in a process likened to putting the genie back in the bottle. While a friend of his initially half-jokingly says he should sue the Anti-Defamation League for Defamation, he works with the ADL on a campaign to reclaim Pepe. A suit against Alex Jones and Infowars leads to a $15,000 reward, which a Jones associate describes as “a bar tab at a strip club,” but that for Furie is more than he ever made on the character. In a final twist, the character is appropriated by the Hong Kong protest movement.

As the film’s narrative has it, Furie’s story ends up in a comfortable place. But the documentary also opens nagging questions about the inability of liberal politicians to understand or connect with constituents in a world where URL increasingly usurps IRL, especially as society is presently isolated with their screens. Right-wing shitposting and conspiracy theories like QAnon carry the seductive, intoxicating, and motivating qualities of an extremely addictive game — one that incentivizes players to generate real-world implications. If their opposition can’t understand the difference between this and an invasive marketing opportunity in Animal Crossing, we might be fucked.