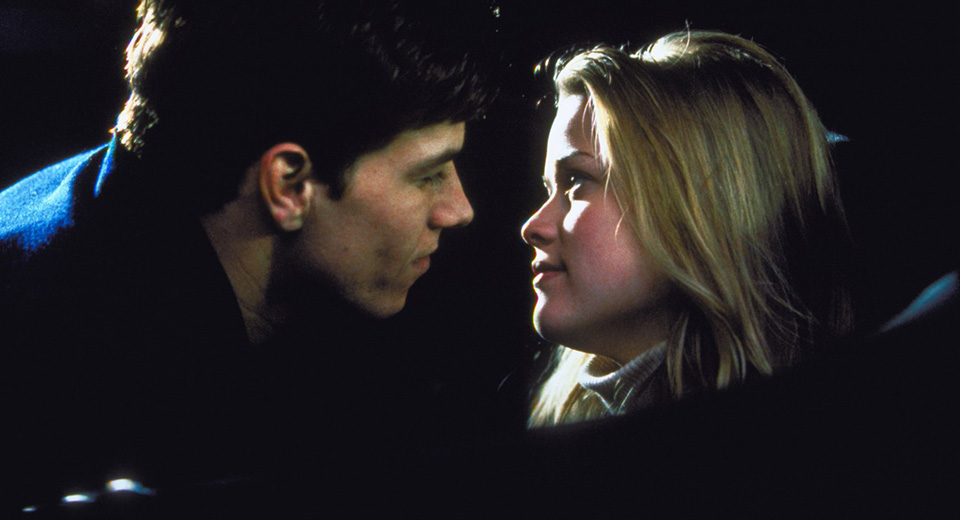 One year before Dirk Diggler made Mark Wahlberg a serious screen thespian, the former leader of Marky Mark and the Funky Bunch landed his first big starring role in Fear, an R-rated teen psycho thriller from Glengarry Glen Ross (and future Fifty Shades series) director James Foley. It’s one of the most entertaining, if culturally suspect thrillers of the 90s: with its simple yet extreme plot devices, emotive performances, transparent moralizing, and righteous soundtrack, Fear is an inexhaustible reservoir of pleasure through moments such as Wahlberg carving “NICOLE 4EVA” into his chest; the camera hurtling toward Alyssa Milano as she screams, “Wait—You’re my only friend!!!"; and, unforgettably, Walberg manually stimulating co-star Reese Witherspoon on a rollercoaster to a shoegaze-y rendition of “Wild Horses” by bottom-tier Smiths knockoff The Sundays.

Witherspoon may be the lead, but the plot is a hot shot of unfettered patriarchal anxiety. The recent Freeway actress plays Nicole Walker, a do-goody virgin who yearns to shake up her perfect life in the upper crust outskirts of Seattle. She's encouraged by Margo (Milano), her uninhibited friend from a broken home. At a rave party, Nicole catches the eye of David (Wahlberg), several years older, who rescues her during a police raid. David's only qualities are Wahlberg’s: his naturally sleepy yet penetrating eyes, earnest voice, and concealed violent anger. (Less than a decade earlier Wahlberg served jail time for blinding a man in a racist attack). David quickly seduces Nicole through a series of montages. (Cue "Wild Horses.") But the overbearing tendencies of dad Steven (CSI and Manhunter’s William Petersen) are vindicated when he finds out that David grew up in a succession of foster homes, and even more concerning, he didn’t attend college. When Nicole is just out-of-frame, David does little to hide his sociopathic leanings from Steven, nor the fact that he also has designs on Margo—whom David is keen to notice Steven secretly lusts after as well, a fact that passes between the men as an unspoken, dirty secret. The more dad does to drive a wedge between the young lovers, the closer it pushes them together, until a discovery leads Nicole to realize she should have listened to her father’s advice. This sets David on a scorched-earth warpath against the family, culminating in a sadistic home invasion thriller third act — Cameron Crowe meets Michael Haneke.