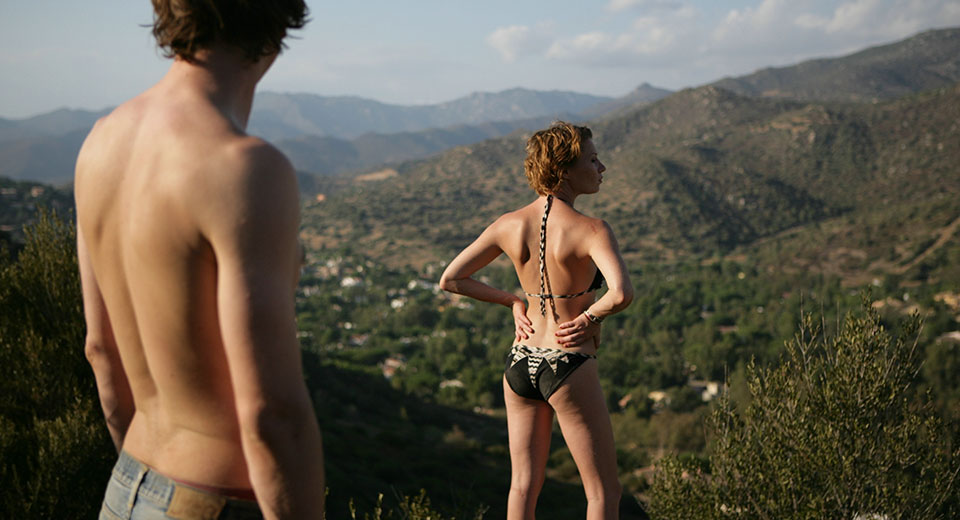 Humor in the films of Maren Ade often functions as a defense mechanism, covering up the layers of disconnect often undergirding even the most intimate relationships. Stuck on vacation in Sardinia, Giita (Briggit Minichmayr) and Chris (Lars Eidinger), the lovers at the center of Everyone Else, spend much of their time riffing off of the same tired jokes while habitually skirting any conversation that promises depth. While not necessarily lacking self-awareness there is a fundamental lack of ability to carry a meaningful conversation past it’s conception. When Gitta probes Chris on why he has trouble saying “I love you,” he simply dismisses her by doling out kisses; when Chris tells Gitta he would rather spend the night going out alone she latches onto him like a monkey and begging him to take her in a gremlin voice; during the film’s tensest argument Gitta simply lies down and plays dead like a possum, refusing to even move.

Troubled enough trying to get along with each other, Chris and Gitta’s relationship gets doubly complicated when they bump into Chris’ colleague Hans and his wife Sana living in a nearby villa. Representing something of an antidote to Chris and Gitta’s chilly intimacy, Hans and Sana appear to be everything they’re not - professionally successful, comfortable in their relationship, and genuinely happy. As Chris bounces between sucking up to Hans to advance his career and withering at the sight of him - at one point even forcing Gitta to hide with him behind a rack of tampons to avoid being spotted in the supermarket - Gitta loudly refuses to put up with the Hans’ casual passive aggression and misogyny.

Ade has a way with faces, often isolating characters from the rest of the scene and forcing us to focus on reactions over actions. Late in the film when Hans and Sana start dancing with ironic enthusiasm to an overwrought love song, Gitta and Chris hang back silently and position themselves several feet away from each other as they listen neutrally. Holding on a medium-wide shot, Ade milks the moment for a genuine sense of romantic desperation as Gitta and Chris take turns glancing at each other with longing while still managing to avoid the other’s gaze. Contrasting wildly with Hans and Sanas glib, facile flirtations this moment almost redeems Gitta and Chris for all the frequent bickering we’ve been privy to - even if they’re doomed to misery, at least their connection is genuine through a shared helpless incommunicability.