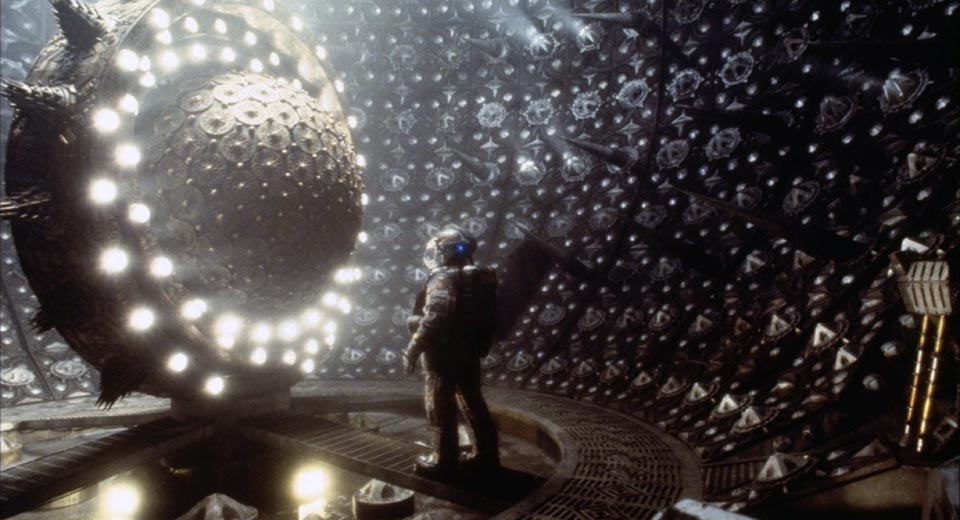 Event Horizon (1997) is the Hollywood adaptation of id Software’s Doom series that we deserved. It is the stuff of literal nightmares, in which hell bleeds onto mankind’s forays in outer space. A decade later Universal Pictures would release a slavish, official adaptation of the game that recreated much of its imagery but none of its dread. Without a techno-infused soft metal soundtrack or ridiculous array of weaponry, Event Horizon proves far more able to capture the existential queasiness wrought when the scientism of the military industrial complex collides against the unreal chaos of the inferno.

Paul W.S. Anderson’s finest hour cribs eagerly from the scenario of Solaris and the design of 2001: A Space Odyssey and Alien, but has its own trashy mojo going. For a film built from spare parts, it is surprisingly alive and occasionally poetic in its imagery. Anderson successfully conjures his creepy atmosphere with flash cuts to disturbing violence, minimal use of digital effects, and a Bava-meets-Kubrick production design. Above all, Event Horizon is unnerving.

The Event Horizon itself is a nuclear-powered spaceship that mysteriously disappeared while wormholing to the nearest star, Proxima Centauri. When it suddenly rematerializes orbiting Neptune, Laurence Fishburne and his crew embark on a rescue/recon expedition. Sam Neill is the Event Horizon’s designer, archetypally concerned more with his baby than the fate of her crew. It turns out that each member of said crew met a grisly death, but the ship returned very much alive.

The plot serves a rote, classically technophobic message about hubris, but the presence of Judeo-Christian eschatology in the midst of interstellar commerce provides a more uncanny experience than most contemporary science fiction. The gravitas of recent sci-fi is founded on thoughtful extrapolations — under the watchful eye of PhD consultants — of what’s currently known. That’s the purpose, more or less, of good science fiction, the literary kind with pretenses toward respectability. This focus on what’s known/knowable all but leaves out the Rumsfeldian Unknown Unknowns or the Unknowable Unknowns which fail the smell test for earnest, science-literate yarns, but easily tickle our bottomless anxiety concerning the void. Yes, the universe is certainly full of rocks and black holes, but let’s not forget it might (might) also be full of monsters and dimensions indistinguishable from hell.