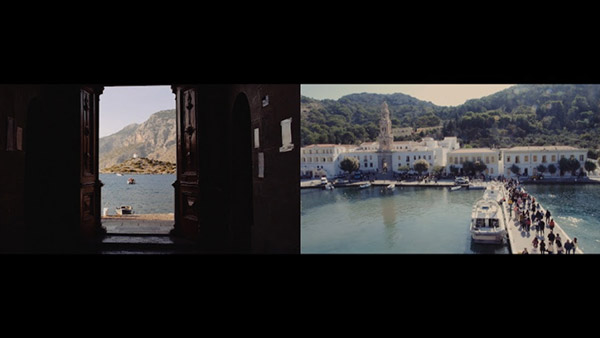 Ellie Ga begins Strophe, A Turning by paraphrasing the Russian poet Osip Mandelstam. Mandelstam compares writing a poem to casting a message in a bottle out to sea. It traverses space and time, the intended receiver determined by chance and their willingness to receive. Ga began the research that led to Strophe with a proposal to study oceanic drift. Poetic connotations aside, the first message in a bottle was sent on a scientific mission, launched from the island of Lesbos by the Greek philosopher Theophratus in an attempt to chart the Mediterrean.

Lesbos and nearby Symi were two of the locations Ga intended to visit during this research, and they are the primary locations for Strophe, A Turning. Situated in the Aegean off the coast of Turkey, the islands have sat at a key intersection of empires for millennia. When Ga arrived in 2015 they were epicenters of the Syrian refugee crisis, a reality of maritime movement that made Ga reevaluate her role on the island. As Ga’s research continued, volunteering with a relief organization became her primary occupation.

Strophe, A Turning attempts to integrate these two experiences of the island. Ga uses the classical idea of a strophe to bring various histories together. A strophe is the moment in Greek drama when the chorus turns to move across the stage: focus shifts and the audience prepares to listen. Ga turns our attention again and again, from the origins of island shrines to the remnants of 20th century forced migrations to the pop origins of contemporary anarchist graffiti. The crisis enveloping the island remains a central tension, with Ga recognizing the limitations of her metaphorical framework, but refusing to turn away.

Ellie Ga is a New York-born, Stockholm-based, artist whose immersive, wide-ranging investigations include the classification of stains on city sidewalks to the charting of the quotidian in the frozen reaches of the Arctic Ocean. In performances and video installations, Ga’s braided narratives intertwine extensive research with first-hand experiences that often follow uncertain leads and take unexpected turns. She has exhibited and performed internationally at the New Museum, The Kitchen and the Guggenheim Museum in New York, and at M-Museum, Leuven; Le Grand Café, Saint-Nazaire, among many others.

Ga is the author of Square Octagon Circle (Siglio Press, New York) and Three Arctic Booklets (Ugly Duckling Presse). Ga was a recent recipient of a three-year Swedish Research Council artistic research grant. Her video series Gyres was produced by the Whitney Museum of American Art for the 2019 Whitney Biennial in New York.

Her work is in the public collections of The Solomon R. Guggenheim Museum, New York; the Albright-Knox Museum in Buffalo; FRAC Franche-Comté, Besançon; Fondation Galeries Lafayette, Paris; Hannebauer Collection, Berlin; the Hessel Museum of Art, Bard College, New York and the Whitney Museum of American Art. Ga is a co-founder of the publishing press Ugly Duckling Presse in Brooklyn.