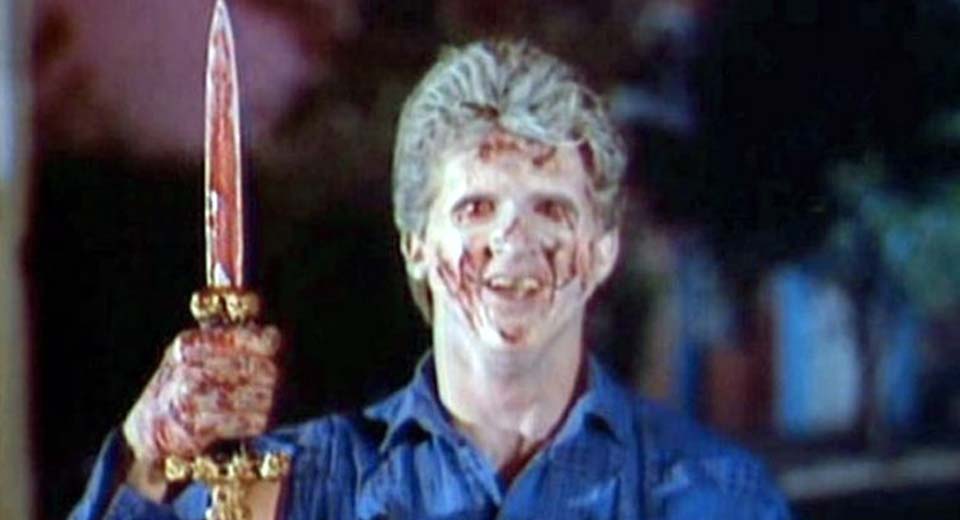 Rubén Galindo Jr’s 1987 film Don’t Panic is a cautionary tale about goofing around with the dark arts on your birthday when your mom is like, geez, right up stairs—keep it down guys! Seventeen-year-old Michael and his friends decide to top off his birthday festivities by busting out the Ouija board. The group summons a murderous spirit named Virgil that is somehow psychically linked to Michael. As Virgil begins to bump off the teen friends one by one, Michael is terrorized by visions of the killings as they occur. Soon it is revealed that Michael’s mischievous friend Tony, the driving force behind the Ouija board shenanigans, has been possessed by Virgil, who is using his body to carry out the murders. Now homework and a newly blossoming romance will have to wait, as Michael sets out to stop the bloodthirsty spirit before it kills again.

Don’t Panic is often considered a Nightmare on Elm Street rip-off, and while it has similarities to Wes Craven’s original (the killer resembles Freddy more than just a little and a few images are lifted completely), the film more closely resembles A Nightmare on Elm Street Part 2: Freddy’s Revenge. The core of Galindo’s film is much like Jack Sholder’s A Nightmare sequel, where the young protagonist’s teenage angst seems to find expression in supernatural torment. Galindo, being a Jr himself , understands that being a teenager sucks, and sometimes you wanna wear sunglasses to school, and your parents want to put you in the psych ward, and, yeah, maybe you’re tortured by an evil demon. Get off my back, dad!

Don’t Panichas sex, blood, and the occult, but someone how the tone the film strikes is one of innocence. Like Galindo’s previous film, Cementerio del Terror (that receives a brief cameo on a TV ), the work is a pastiche of sorts—a little bit of A Nightmare on Elm Street, some catholic fear mongering a la the “satanic panic,” some malt shop romance, and even some gunplay. It’s a horror movie that could be ripped right from the brain of a kid, troubling the line between adolescence and pre-pubescence. After all, the hero wears dinosaur pajamas to bed before and after he loses his virginity. So clearly something is going on.