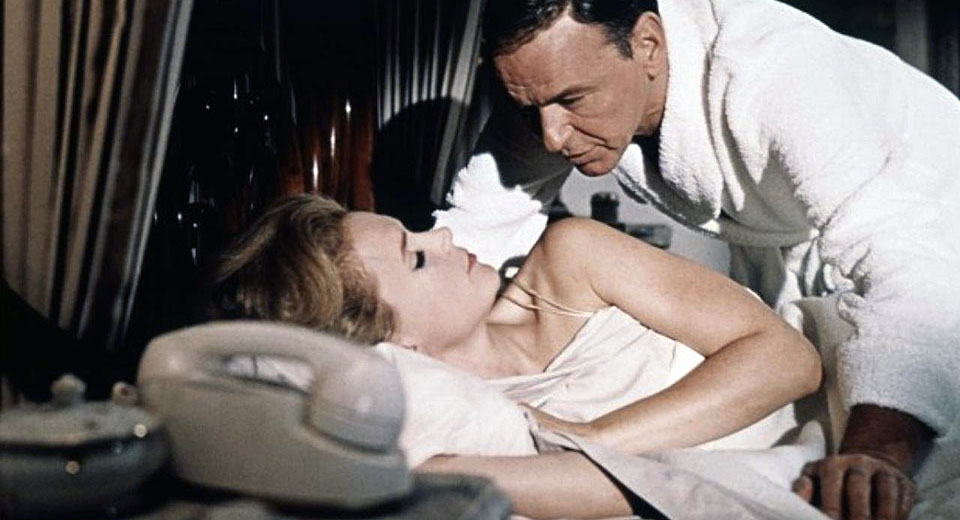 In The Detective (1968), Frank Sinatra and his famous, perversely blue eyes are stiff or vacant until he’s angry. Only then does he fully inhabit his role as a righteously square cop at odds with his corrupt colleagues and a sixties culture that’s left him behind. A couple years later Sinatra would join the Republican party and back Reagan’s gubernatorial reelection before getting cozy with Nixon, thus severing his starpower from decades of liberal advocacy. Resembling its star’s ideological pivot, The Detective teeters on the edge of the political center with groundbreakingly compassionate representations of homosexuality on one side and utter contempt for the postwar intelligentsia on the other. He exits the film estranged from his wife, his beloved police force and an increasingly sick society, casting himself as the world’s last honest man. One of a slew of late-career cop roles for Sinatra, The Detective is an enthralling yet self-serving ode to a former heartthrob and his loosening jowls.

Sinatra’s Joe Leland thinks American theater is full of shit and psychotherapy offers suckers a flight from personal responsibility, but he’s got just as much wrath for fellow officers who strongarm the gay men brought in for questioning after the son of a wealthy retailer is found castrated and bludgeoned to death. The film ultimately establishes a connection between the murder and a wider conspiracy predicated on pathologized homosexuality, but Leland and the film’s view of clandestine gay life are largely sympathetic and nuanced in their details. The investigation eventually pits Leland against a host of evergreen noir heavies: therapists, crooked cops, corrupt politicians and the wealthy. They’ve got influence and limitless resources, but our man won’t rest until the truth sees daylight.

But while he’s pursuing New York’s evil real estate cabal, Leland must navigate his disintegrating marriage to Lee Remick, a sociologist who once called him the “realest man” she’d ever met. She’s been sabotaging their happiness with meaningless dalliances, unconsciously determined to ruin the only family she’s ever had. Their frank discussions of her transgressions evince a complex understanding of sexuality, even if Sinatra can’t quite stomach being cuckolded. The contributions of director Gordon Douglas (reuniting with Sinatra for their third detective film in two years) are largely inconspicuous, save for repeated closeups in which Sinatra and Remick look directly into the camera. He stares, struggling to emote in the absence of anger, while she flirts and pleads for his attention. In these incredible shots Remick is mesmerizing while the icon of tuxedoed cool is trapped, made vulnerable by reaching his dramatic limits.