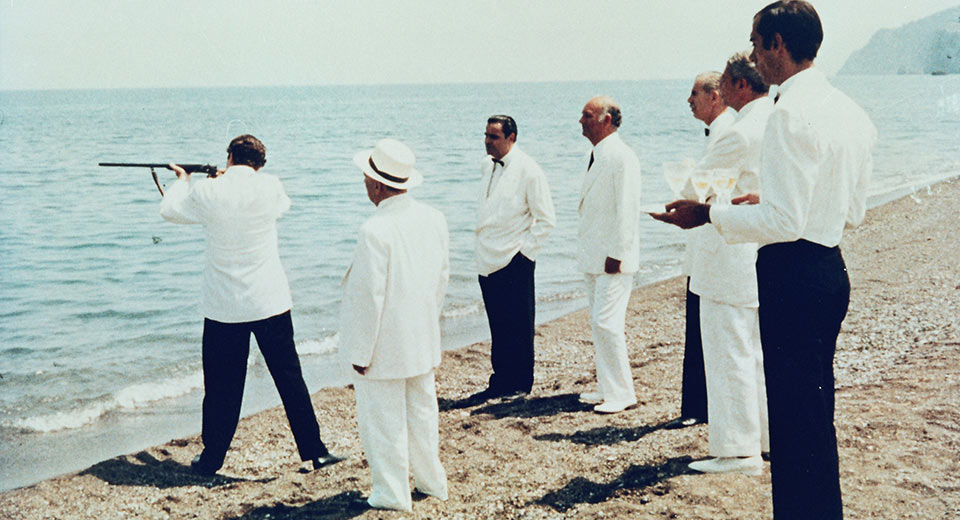 Greek time-sculptor Theo Angelopoulos—whom the Museum of the Moving Image is honoring with a full retrospective—made Days of '36 thirty-six years after the events portrayed in it. Those events are not many; true to Angelopoulos' subsequently earned reputation as an unapologetic modernist who demanded a lot of patience from his viewers, the action of Days of '36 consists of little more than a desperate inmate in a rural prison barricading himself inside the visiting room with a conservative politician, making a few demands, and waiting, while the prison administration and the hostage's party-mates brainstorm ways to get him out.

As The Daily Telegraph put it, on one level Days of '36 is "an audacious political allegory attacking the Colonels in the guise of targeting an earlier regime" (that of the King-appointed autocratic Prime Minister, General Metaxas), but on the formal level it's an anti-suspense film. The plot has the makings of a thriller -- What are the guy's motivations, his background? Will the government manage to rescue the politician, and how? Who do we root for? -- but the inertia with which it is formally imbued forecloses the least possibility of thrills. The closest we get to an action sequence are a seemingly coincidental prison riot and the extraction plan the bad guys (i.e. the government) ultimately settle on -- confirming the hostage-taker's position through a skylight, then sniping him through a semi-opaque window.

Angelopoulos' favorite camera move is a long 360º pan, where the subject (a vehicle or a person) approaches from a distance, then slowly completes a circle around the camera. This happens at least three times in Days of '36, almost enough to turn it into a joke. More slow pans and wide tracking shots following their subjects in profile fill in the rest of the runtime.

But don't think Days of '36 is a pure endurance test. It has moments of absurd humor—like when the prison administration is befuddled by the hostage-taker's demand for music—and a hostile tension runs through its dominant ennui. After all, the film takes place in a prison, a location defined by the dialectic of boredom and latent violence. Besides, it begins and ends with assassinations; the opening scene has a trade union leader sniped at a rally. Since the causal connections between this and the rest of the film's events remain obscure, multiple viewings might pay off. Then again, it might be more prudent to save some of your cine-stamina for the longer entries in the retrospective.