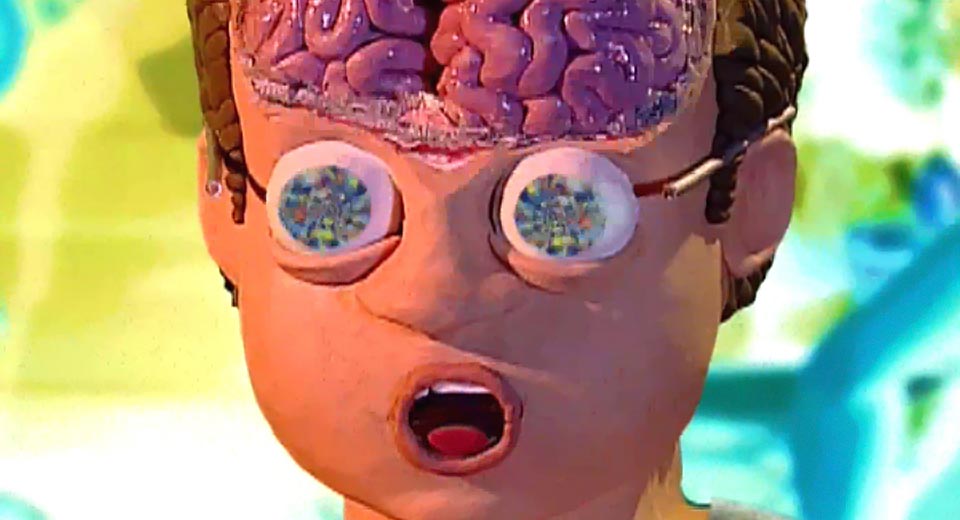 Knowledge of David Daniels’ grueling production methods encourages awe for the phantasmagoric blasts of clay he’s produced for the likes of MTV, Clearasil, and Pee-Wee’s Playhouse since the 1980s. Put simply, he painstakingly sculpts long loaves of clay, each cross-section of which offers a slight variation of its predecessor. As Daniels photographs each slice, his loaves become shorter and recede, while the image within the loaf twists and melts into psychedelic distortions of human anatomy, symbols, blurs and in one memorable instance, a dollar bill. He has long incorporated more traditional claymation practices effectively, but the loaf method (for which he coined the term “stratacut”) has thus far produced his most striking work. To consider his technique is to scratch one’s head and wonder, “why the hell would anyone do that?” before quickly realizing it's because the results look and feel like nothing else.

All that said, audiences should still be able to appreciate the brief insanity of Daniels’ films even without the production background. The moment we no longer have room for weird animated shit is the moment that cinema’s over and done with. The stark physicality of his animations, which form the interior of a literal three-dimensional block and thus exist in their entirety onscreen before they’re revealed, sets them apart even from other stop motion films in which the weight and density of figures provides a grounded respite from the weightless baubles rendered by computers. Daniels’ animations have an unsettling biology to them, a sense of his images being violently excised from one another. One can ignore, or be ignorant of, how these films were made and still happily choke on their thick undulations of clay.

His MFA thesis, Buzz Box (1985), remains his finest work, the one furthest removed from the auspices of corporate lizard people and the freest expression of his warped sensibilities. In it he sculpts television’s cacophony as arrangements of fighter planes, hamburgers and desperate faces cascading toward and away from the viewer in nauseating arrays. At around 10 minutes, this excruciating gasp begs the question of whether eager viewers could even handle prolonged exposure. As he’s produced mostly brief promos and music videos since his debut — a soul-crushing reality for nearly all independent animators — it’s a shame he hasn’t been unleashed like this in three decades.