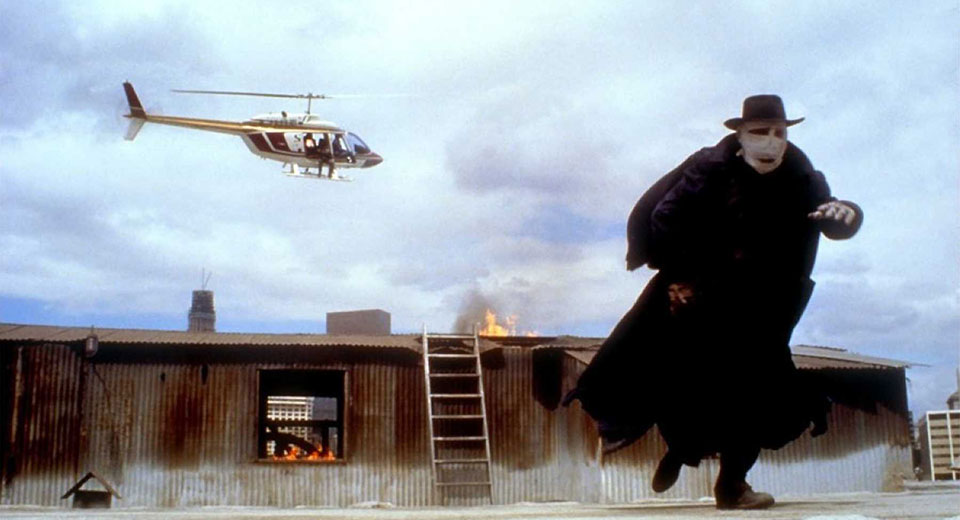 We have Sam Raimi to thank for the glut of superhero movies that has gobbled up screens since his original Spider-Man (2002) movie proved Marvel’s stable of gaudy heroes were viable box office stars. But a decade earlier Raimi released his reverse atonement, Darkman, an R-rated ersatz Batman boiling over with the seedy imagination of comic books but unburdened by the weight of an endless back catalog. Capitalizing on the success of Batman (1989) the previous year, Darkman pushed Burton’s vision of a costumed brooding antihero into the realm of horror.

Liam Neeson stars as earnest scientist Peyton Westlake, who’s developing regenerative fake skin in a warehouse lab. Due to his girlfriend’s (Frances McDormand) involvement in a real estate scheme, Westlake is thrown into his own batch of chemicals by a gangster named Durant (Larry Drake). An experimental surgery grants him super strength and immunity to pain, at the cost of gruesome scars and permanently unbalanced emotions. Believed dead, he returns to his lab to perfect a 3D printing system that can synthesize an accurate, though temporary, mask of any person’s face. He crafts one in his own likeness so that he can win back McDormand, but the rest are for infiltrating Durant’s gang in pursuit of vengeance. Like Batman, Darkman’s motivation is rooted in victimhood, but unlike the endlessly mythologized caped crusader, Raimi’s hero never looks beyond his own pain. He’s as much a Universal Pictures monster as he is a superhero.

The film is immediately marked by Raimi’s unmistakable fusion of Tex Avery gags and body horror. Liberated by a modest studio budget, he adds helicopter chases, huge explosions and digital effects to his retinue, developing an impressive escalation of setpieces. Whenever a Sam Raimi scene appears to be winding down, you can bet on at least one more brilliant jolt. His mischievous maximalism suited Spider-Man just fine, but with Darkman he was unbeholden to IP owners or obsessive fandoms, and thus more comfortable playing in the darker corners of his perverse imagination.