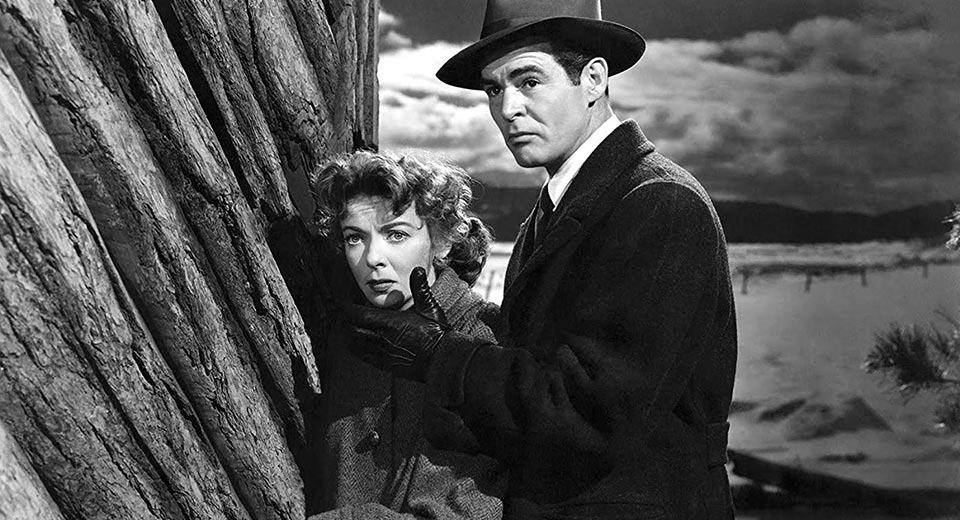 In Nicholas Ray‘s On Dangerous Ground, Robert Ryan plays a stone-faced detective in an unspecified vice-ridden city, where life requires a knack for subterfuge and the law is anything but the final word. He’s introduced as the third in a three-man team: Pete, a man more married to work than to his wife; Pop, a portly father of seven; and Jim, a bachelor handsome enough to be married three times over but who still eats his meals alone by the stove. In rapid sequence, the men are collected from their apartments, brought to the precinct, and briefed about a couple of recidivist cop-killers; Ray has laid out his characters and plot with the agility of an experienced butcher. The three get back in their sedan and snatch a guy who “fits the description” but winds up being the one doing the scolding: “Dumb cops! I was only running.” In today’s New York a line like that would land your face on the hood of a squad car in two seconds, but Ray’s allegorical city enjoys a tight enough weave of anti-authoritarian sentiment to force the cops to retreat in the face of firm support from the surrounding crowd. Here the movie’s main theme is expressed through its most frequently recurring motif: a policeman’s loneliness amidst a population in which contempt for the police is nearly universal.

The reason for Jim’s solitude is never a mystery to him, he just hasn’t acted upon his awareness of the facts. Although he knows it and says it (“Cops have no friends. Nobody likes a cop—on either side of the law”), it’s up to his Captain to supply the blindingly obvious answer: “Is that what you want, people to like you? Then you’re in the wrong business and you ought to get out.” A healthy mistrust of the police and a spontaneous popular sympathy for victims of the law were already felt in Ray’s first feature They Live by Night, but On Dangerous Ground reveals that in Ray’s world everyone hates cops, even the cops themselves.

It takes a blind person to see Jim as anything more than a cop. Mary (Ida Lupino) is introduced as an offscreen voice, with Jim and a vigilante dad (Ward Bond) gaping into the camera as she welcomes them into her house. As the camera/viewer, we are Mary for a shot and a half—a bit of mischief since it misleads us into associating her with a gaze. Then Ray starts to play with our empathy more directly: we see through Mary’s eyes twice more, but now everything is blurry, forcing us to experience impaired vision. In a line that doubles as a commentary on the movie’s affective strategies, Mary wonders at Jim’s ability to talk to her without pity in his voice. She’s right, but if she could see George E. Diskant‘s cinematography (which, earlier, was brusque and pragmatic and has just turned decidedly Golden Age) or hear Bernard Herrmann‘s suddenly syrupy score, she’d know that On Dangerous Ground has shifted to an emotional paradigm of commiseration. Gone are the savage techniques that accompanied Jim’s resentful violence, the single-point lighting and the shoulder-mounted camera of the back-alley chases and interrogations. Now the point is that here is a human being who isn’t a social parasite but more like a saint, who doesn’t make Jim’s hands feel dirty and tells him the truth about himself: “Sometimes people who are never alone are the loneliest.” She should know a thing or two about solitude, being confined to an empty house in the middle of a frozen plain. But she also knows that a crowded city can be the loneliest place of all. Loneliness is a choice, and it’s not out there in the world—we carry it within ourselves.