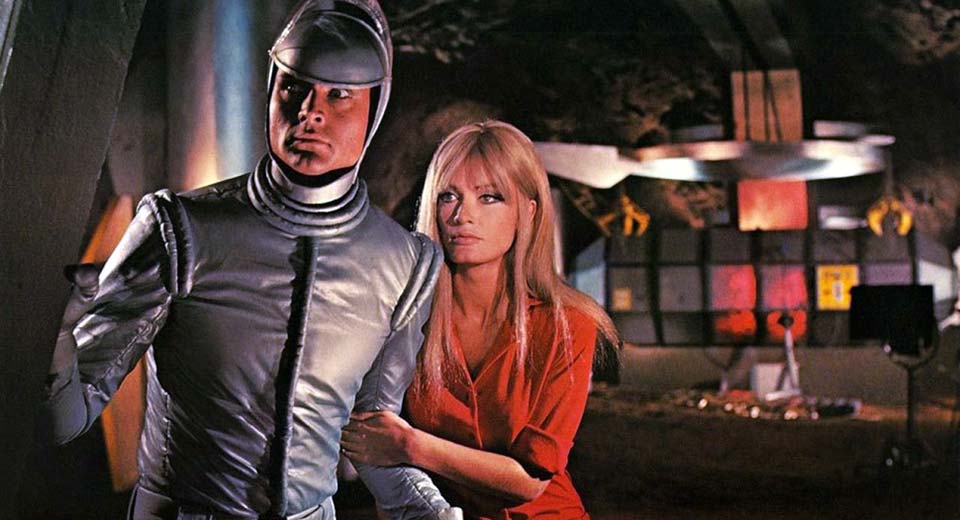 The most iconic antihero of Italy's so-called fumetti neri adult comic books, the black-vinyl-bodysuit-clad master thief Diabolik, was introduced in 1962 by a Milan-based publishing house. His strong eyebrows and unabashed hedonism quickly made him a household name, his exploits synonymous with revolt against a culture dominated by the Catholic Church. Charismatic, urbane, and handy with high-tech gadgets, Diabolik was a cross-pollination between Batman, Fantomas, and James Bond. His popularity was such that, in 1967, legendary producer Dino De Laurentiis gave infamous giallo director Mario Bava 1.5 billion lire to make a movie adaptation.

The result was Danger! Diabolik starring John Phillip Law as the slick supercrook and Marisa Mell as his fetching partner, Eva Kant. Accompanied by Ennio Morricone's surprisingly avant-garde soundtrack of twangy guitars and atonal trumpets, the duo pulls off one miraculous heist after another: $10 million in hard cash ("The largest single shipment of dollars ever made!"), an invaluable emerald necklace, and finally a 20-ton gold ingot encased in an indestructible titanium carapace. Diabolik makes use of cutting-edge larceny technology, including Exhilarating Gas (with, of course, Anti-Exhilarating Gas Capsules to render himself immune), a steel-cutting laser ("This laser gun gan melt anything—except you, honey"), and a Polaroid camera (to fool the CCTVs, naturally). Diabolik climbs walls and blows up bridges, then drives his Jaguar E-Type to safety in his ultramodern underground hideout and bathes in a mountain of $50 bills. His MO is efficient, his pleasures extravagant.

Diabolik is nigh-matched only by the indefatigable Inspector Ginko, played by the hardest-working man in French show business, Michel Piccoli. (Piccoli is such a force of nature that his varied, decades-long career invites comparison to that of Nicolas Cage.) As Diabolik's targets become more audacious and his methods less scrupulous, our sympathy shifts to Ginko, whose inept attempts at defending the dwindling resources of his beleaguered nation are so earnest that our hearts ache for him. The treasure aboard the armored train that is Diabolik's ultimate target is nothing less than the unnamed country's entire treasury consolidated into one enormous gold brick; thus, his victim is no longer some withered aristocrat who clearly deserves it, but the taxpayers.

A review in Positif described Diabolik as "negative, violent, anarchic, hedonistic, perverse, seductive—a role model for leftist students invading the streets to challenge their fathers." But what does he stand for except unfettered narcissism? His ingenious crimes are not innocent enough to dismiss them as youthful pranks; to get what he wants, he casually slits throats and riddles men with bullets. He's egoism incarnate, an avatar of the entitlement of which the Greatest Generation accused its offspring. But for all that, he represents a leaner, pre-steroid masculine ideal that has been absent from recent comic book adaptations until Tom Holland.