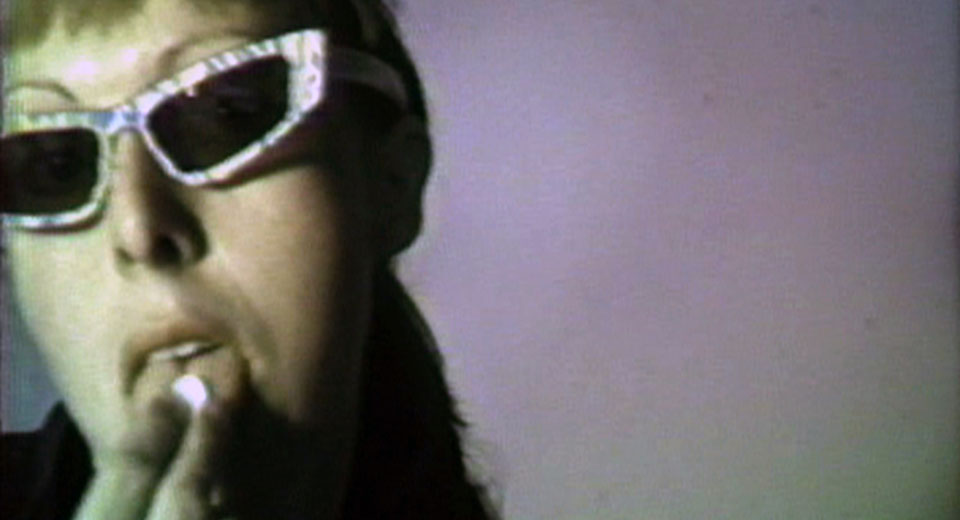 Working with a hand-me-down camera from her mentor William Wegman, Cynthia Maughan created more than 300 video works between 1973 and 1980, after which she retired from artmaking. Earnest and ironic in equal measure, and often macabre, her tapes are short and punchy, yet intimate. It’s inaccurate to describe Maughan as entirely overlooked: she was included in documenta 6 (1977) and the Getty’s exhibition California Video (2008), curated by Glenn Phillips, which led to the preservation of Maughan’s original ½” camera tapes by Getty conservator Jonathan Furmanski. And yet it’s fair to say that her uniquely ensorcelling body of work is generally under-recognized. On the occasion of her passing on June 25, my colleagues and I at Electronic Arts Intermix, where I work as Technical Director, host an all-day tribute to Maughan.

Maughan shares affinities with many Southern California contemporaries such Paul McCarthy, Martha Rosler, Nina Sobell, Eleanor Antin, and Wegman, exploring themes of abjection, feminism, and domestic life in direct-camera performances. In most tapes, she either adopts a persona to deliver a short in-character monologue or performs simple conceptual gags based around common objects. Her subject matter is often lurid, drawn from B-movies, gothic literature, lifestyle magazines, pop music, and true crime fiction. In “Frozen and Buried Alive,” the artist appears with her head just out-of-frame over a wedding gown, in which she describes being entombed in a narrative that comes across as Poe channeled through Roger Corman. Another tape, “Poor Woman Goes Crazy,” fits a pithy and disturbing tale of violence in the vein of Flannery O'Connor into a single minute, including the unforgettable line, “Jesus touched the tip of my chin one time, and he said, ‘Blessed are the poor in spirit, for they are the children of God,’ and I said, ‘Shit, Jesus, call me anything you like, but don’t call me late to dinner.’” Other tapes are more plainly funny, including crowd-pleasing grannypanty showcase “The Way Underpants Really Are,” and absurdist crime stories “I Tell Three Cats About Jail” and “Tamale Pie.” In an era of self-documentation and performance for social media, her work resonates as strongly as ever.

Today's screening includes the entire body of her work distributed EAI, which runs approximately 160 minutes and will be shown on loop between 10:00 am and 6:00 pm. The screening is free, come-and-go, and very highly recommended to anyone who has the day free.