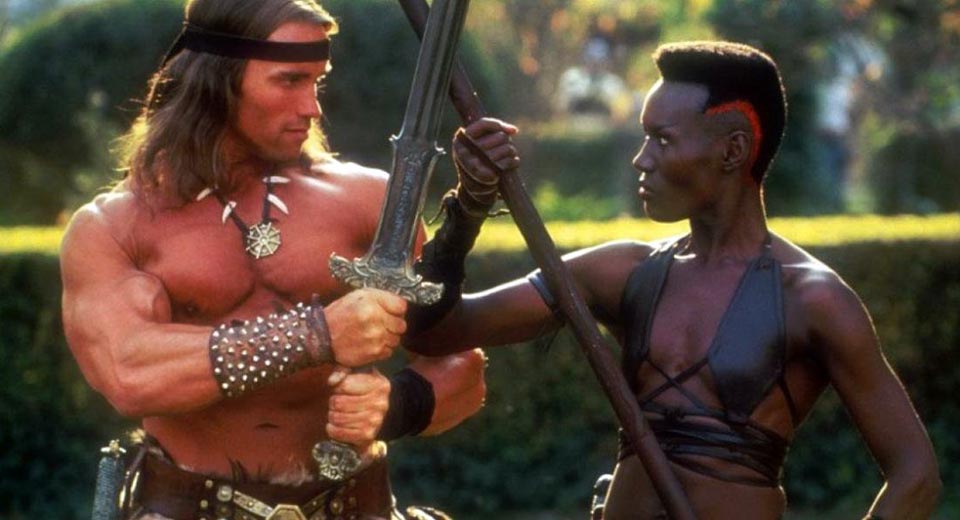 Conan the Destroyer (1984) is the Platonic ideal of a sword-and-sorcery adventure. (Conan: "What good is a sword against sorcery?") All the components are there in their pure form: an evil wizard, a virginal princess, a magic gem, and feuding peoples who represent different stages of social development (savage, barbarian, civilized). Conan's crew itself is a carefully curated (yet supposedly spontaneous) collection of stereotypes: a fierce African warrior, an Oriental sage, a reticent Central Asian giant. The premise is so skeletal it belongs in an 8-bit platformer: Conan is to infiltrate the lair of the evil sorcerer Thoth-amon and retrieve a magic key; the key will give Queen Taramis magic powers, which she'll use to bring Conan's love, Valeria, back to life. He'll have to traverse majestic plains, ice palaces, and ancient caves; he'll have to fight cannibal witch-doctors, ghost dragons, and ultimately the reanimated god of gods, Daggoth.

Conan the Destroyer can be read as a political allegory (Conan's haphazard crew as a multiethnic egalitarian community defeating a retrograde caste-based monarchy, democratic America versus the Soviet Union or some Islamic theocracy), but it might be less arbitrary to read it as an Oedipal quest: orphaned Conan has to kill both the possessive superego Mother (Queen Taramis) and the monstrous ancient Father (Daggoth) by breaking off his horn (castrating him), in order to accede to the throne (thus becoming the Father). There's no shortage of Freudian motifs, like Princess Jehnna's penis envy when she asks Zula (Grace Jones) to make her into a warrior. Zula hands her a staff (phallus) and shows her how to wield it, whereupon Conan grabs the staff, throws it away, and hands her his enormous sword, a "real weapon." Or Conan's belated mirror stage, where he realizes that the manifest lizard-monster is a mere projection of his unconscious and the only way to kill it is to attack his own ego-object, smashing all of his reflections in the ice palace's mirror chamber.

Try guessing at the anthropological referents of this world's peoples. Grace Jones is called Zula, but her tribe is unnamed (however, all its women are warriors). What about Cimmeria? We learn that "Cimmerians have no rulers," yet Conan dreams of becoming its king. The soldiers of Shadizar look like a mix of teutonic knights and mongolian bandits, and their religion involves polytheism and a mythical reverence for their warrior caste. What about the movie's geography? Are the Karpash mountains meant to evoke the Carpathians? They run along the border of the mythical kingdom of Corinthia, also a real place in Greece. The landscapes Conan rides through could be anywhere from Mongolia to Utah, but were shot mostly in Mexico.

Although most of the movie's real-world referents are too eclectic to make sense of, one is unambiguous: Conan stands for his creator, Robert E. Howard, a border-town misfit, mythology enthusiast, and cruiserweight boxer who killed himself at the age of 30. A fugitive in the 20th century, he longed for simpler times. You'll be longing for simpler times too, i.e. the mid 1980s, when Schwarzenegger was still only an immigrant with a dream.