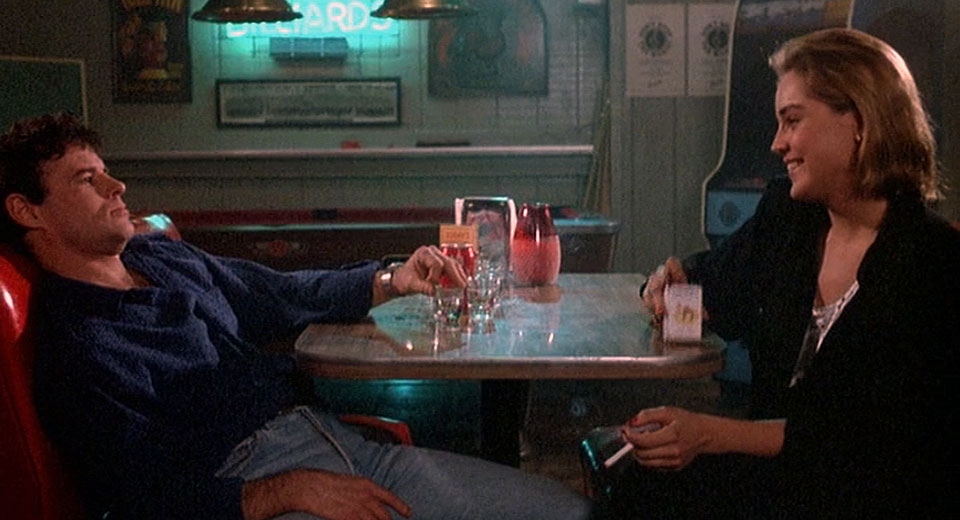 Not much has been written about the career of director Dorothy Ann Puzo. In a LIFE Magazine photo essay spotlighting the literary success of The Godfather, author Mario Puzo suggests his daughter would be an ideal casting choice for Kay, the role soon to be played by Diane Keaton. Later, in a first-person essay for Esquire covering the film’s 1972 New York premiere — a soiree that included Henry Kissinger, the Glenn Miller Orchestra, and a contingent of Apache men invited by Marlon Brando in his stead — Dorothy Puzo describes her brother Tony as the movie buff of the family: “I’m more TV myself.”

It’s unclear when Puzo’s big screen ambitious took root — perhaps she caught the film bug some months later, when she appeared on stage to accept her father’s first Oscar on his behalf — but in 1987 she released her sole feature as director and story co-writer, Cold Steel. Querelle’s Brad Davis, nearly unrecognizable with a shirt on and sans sailor hat, plays Johnny Modine, a hot-headed cop whose father is killed on Christmas Eve in a staged robbery that feels suspiciously like a hit. The perpetrators include wry cockney Adam Ant, Repo Man’s Sy Richardson, and Jonathan Banks as “Iceman,” a sadist whose mangled throat and chilling voice box seems to have some connection to Modine’s past. As Modine loses himself in drink, enter Sharon Stone, an ostensibly sympathetic figure who could not be more plainly broadcast as a femme fatale sent to seduce Modine for nefarious purposes.

With all respect to Ms. Puzo, the Cold Steel’s greatest quality is the degree to which it feels like the glorious, unsung Filipino and Indonesian action movies of its era, themselves uncanny, quasi-parodic riffs on Hollywood tropes. The tone alternates between whimsically silly and graphically violent. A great deal of the budget appears to have been spent ramping flaming cars — by my count, about a dozen — through simple edifices such as popcorn stands that appear to have been hastily assembled just before their destruction. Davis is at one point stripped to his waist, strung up with handcuffs, and tortured in a club not dissimilar to the one in Beau Travail. (“It is the Querelle guy!”) Adam Ant, polishing his submachine gun, gets a monologue about sex and gun control in America. The bad guys walk around in cheap suits with shoulder-strapped automatic weapons that fire poorly synced gunshots. Otherwise, the soundtrack is a mix of blue-eyed power soul, saxophone music that plays whenever a woman is on screen, and a generic keyboard score. Everything is clumsily tuned for maximum efficiency and entertainment, of which it offers no shortage. Cold Steel gets the job done.