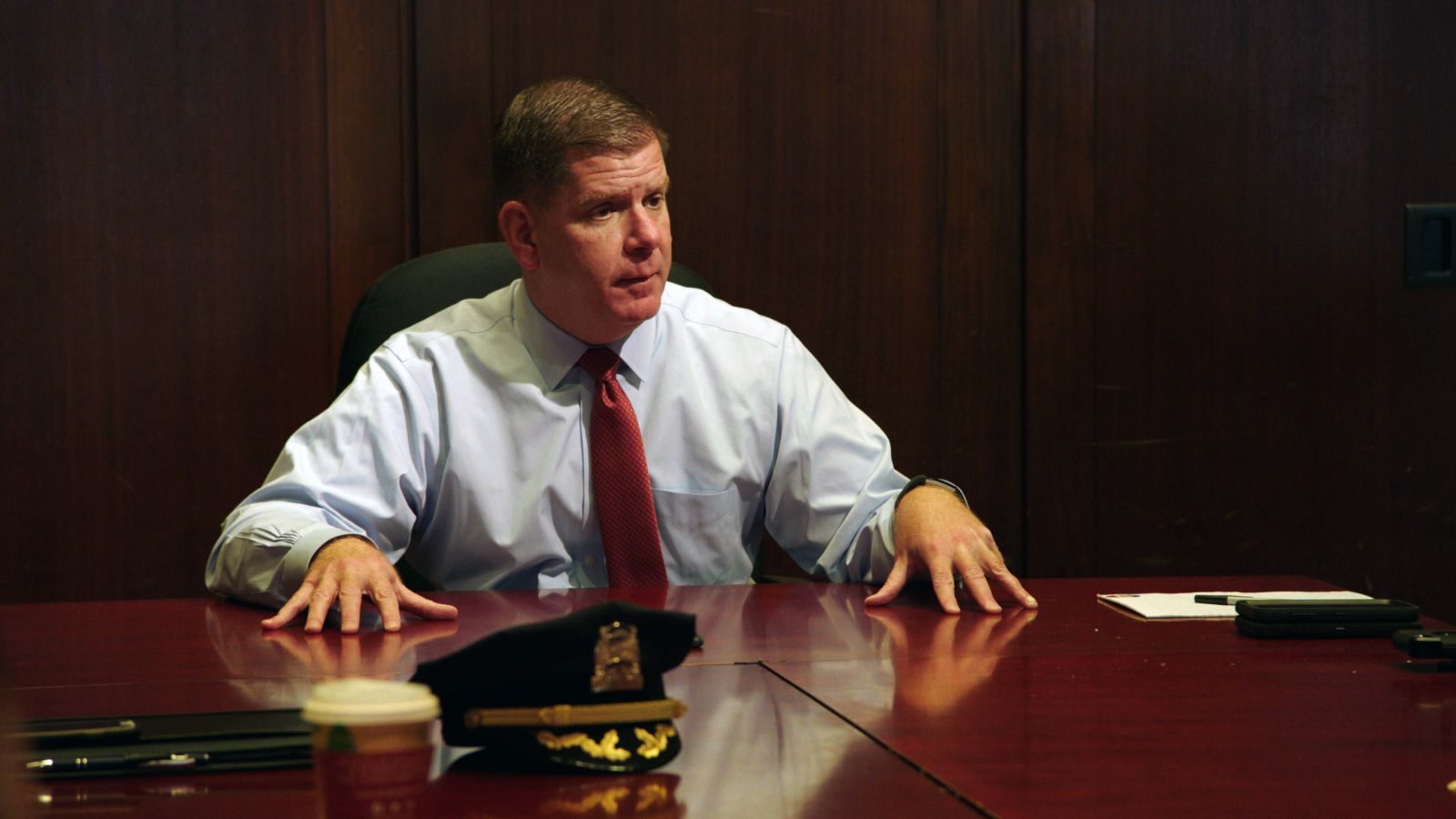 Clocking in at a sizable four-and-a-half hours, the latest epic from veteran documentarian Frederick Wiseman depicts the attempts of a city’s government and population to define itself honestly, and to care for its inhabitants. What city? Well, the minute the names “Mahty” and “Mahk” come out of Mayor Marty Walsh’s mouth should clarify that we are in Boston. Now, I know what you’re thinking. A four-and-a-half hour documentary about the bureaucratic infrastructure of Boston? What could be more fascinating? To watch City Hall is to understand patience is a virtue, both off-screen and onscreen. The film mainly follows Walsh as he speaks to city officials, elderly constituents, activists, and other groups. Wiseman’s long takes and precise editing promote a rhythm that sharpens one’s attention. The third scene of the film is literally a slideshow presentation on the city budget. The camera trains itself on the slides, letting the information sink in, and then cuts methodically to people listening and absorbing.

The vernacular spoken in City Hall is at once grand, dignified, and yet so routine it can feel hollow. It’s the language of speeches, platitudes, campaign promises, business meetings. In one poignant moment, a lesbian couple is married somewhere in the depths of city hall. The women recite their vows, repeating the words of the officiant (who slips up and mistakenly pronounces them “husband and wife.”) Cut to Mayor Walsh congratulating the Red Sox at a press conference. City officials urge fans to celebrate calmly. The words here are that of housekeeping and protocol, which is why I was somewhat baffled at the sight of a woman recording the event on her phone. Why the hell would someone film something like that on their phone? I thought. And then I thought, well, why would Frederick Wiseman film it and put it in a movie?

As someone who also makes observational films, I found myself sympathetically slipping into my own creative gaze, a lens I cannot always turn off when watching films. The instinct is to just keep filming, no matter what. You never know what sort of extraordinary human event you’ll capture — a fleeting, subtle nuance of life itself, recorded in its plain poetry. The film does, nevertheless, present itself in a rather repetitive structure. Some of the narrative choices here are maybe puzzling. Marty Walsh is not exactly the world’s most compelling character. We only see him at work — we never get a chance to see who this man might be when he is not dutifully interacting with his constituents or colleagues.

Ultimately, Wiseman’s cinema eye is certainly one of equity. He’s made this film, and shared it with the world, I believe because he feels there is a moral lesson to be gleaned from the glorious, patient, painful, devastating, arduous duty one has to rectify one’s life — and the lives of those around them — to the betterment of their society, their nation, their time. The film’s closing highlight, however, feels like our zeitgeist held up to a funhouse mirror — a female African-American Boston police officer leading the national anthem. It’s exactly what a white ninety-year-old American documentarian would cap off his film with in the year 2020: a spectacle so awkwardly charged in its relationship to our current reckoning, standing in pride and guilt at the same time.

City Hall is available to rent through Wednesday, September 30 as part of the New York Film Festival