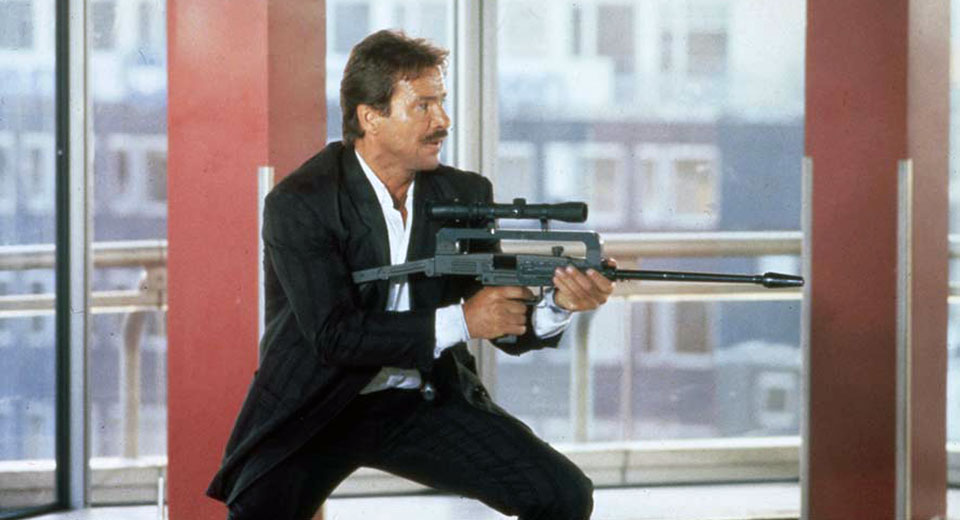 Perched like a hawk in his luxury hotel room, Probek spends most of Domink Graf’s The Cat glaring down through his telescope at the smoothly controlled chaos of the bank robbery he’s orchestrated in the courtyard below. Suave, mustachioed, and outfitted with all manner of police scanner, Probek is the criminal mastermind as corporate business man — always cool, overly professional, and in it more for the thrill of the transaction than the three million Deutsche Marks he’s aiming to ride away with. The real loot is the bank manager’s wife, a cunning yet anxious femme fatale who is in cahoots with him in his scheme to leave the cuckold in the dust.

Like in all the best heist movies, Probek’s perfect plan comes with a few minor kinks, and the thrill of The Cat comes from watching cops and crooks frantically trying to outsmart each other. Leading the small army of cops headquartered five floors below Probek in the hotel is the seasoned, greying detective Voss. Constantly swearing as his plans are thwarted one after another, Voss is less righteous upholder of legal order than sly showman cut from the same ilk as Probek: “the insurance will cover it,” Voss rationalizes when asked about potential casualties before an armed assault upon the bank.

While the crooks don’t really care who gets the money, and the cops don’t fuss much over who’s going to make it out alive, it’s hard not for us to get swept up in the absurd and futile cynicism in which Graf paints the story. When the fallout does come it is swift in its brutality, bitterly unsatisfied, and sourly punctuated by an upbeat banger, The Animals’ “Good Times,” ironically playing over the end credits. “Life is a pig, but sometimes you can slaughter it,” one of the bankrobbers muses to himself as a futile reassurance late in the film, inadvertently awarding us perhaps the clearest summation of the film’s bleak outlook.