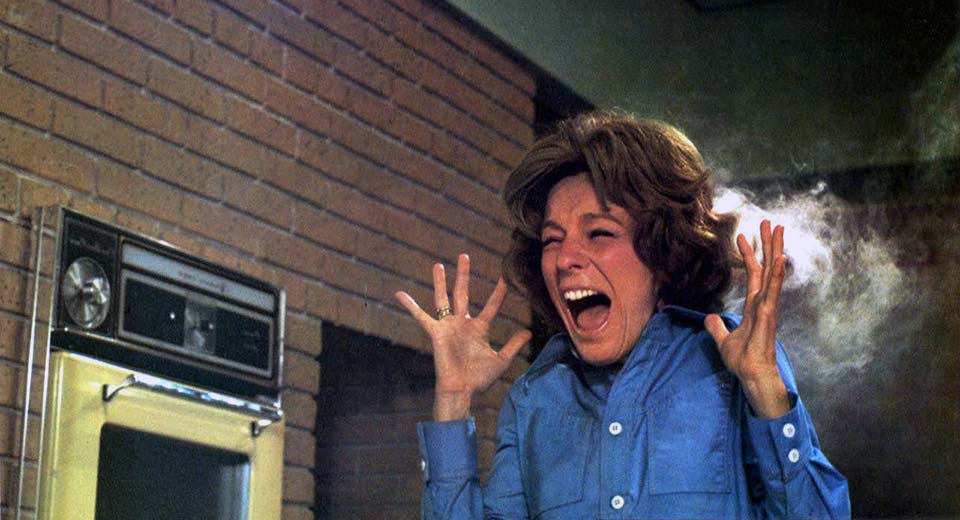 As a preacher rails against the ever-spreading infestation of violence and crime, a massive earthquake hits a small California town, causing a deep chasm to open on the Tacker family plot, terminating next to a tiny house on the top of a lonely hill where one man will soon begin what might have been the end of the world. As if to confirm the preacher's warnings, a local fellow soon discovers seemingly indestructible, gigantic metallic cockroaches (they're kind of like locusts?) with the ability to start fires crawling slowly in the vicinity of the smoking crevasse; in a particularly disturbing sequence he watches in horror as one of these creatures latches to the face of a cat and seemingly burns into its skull. He brings the cat's corpse to local biology professor James Parmiter, who is immediately fascinated by these strange, pyrotechnically-able insects that consume ash and enjoy blowing up cars and, you guessed it, thirst for human flesh.

The rub is that the bugs themselves aren't, in fact, the harbingers of the end times; having persisted for so long deep within the planet, they are incapable of surviving in the lower pressure of the atmosphere above ground. But Doc Parmiter has a special interest in the lost ability of man to converse with his fellow earthly creatures, and in these strange survivors of some prehistoric era he sees the opportunity to finally bridge the communication gap—by breeding them with the common contemporary cockroach. Needless to say trouble, and some fantastic suspense set-pieces (filmed, incidentally, and somewhat poetically, on the old Brady Bunch television show set), ensue. Thus though the earth produced a very dangerous creature it was actually unfit for survival amongst the so-called fittest, and it was man's intervention that turned the situation deadly and launched a potential war of the coprophages. An ever timely lesson for us all.

Bug was the last film William Castle was involved in making, as producer and co-writer, and it's a fitting final work for the man who created the infamous, John Waters-beloved Tingler. With a truly moving performance by lead actor Bradford Dillman and directed by French auteur and Harvard graduate Jeannot Szwarc and featuring amazing, squirm-inducing practical effects that will send the katsaridaphobics among us (and there are many in this city) to the insecticide aisle, it's not to be missed.