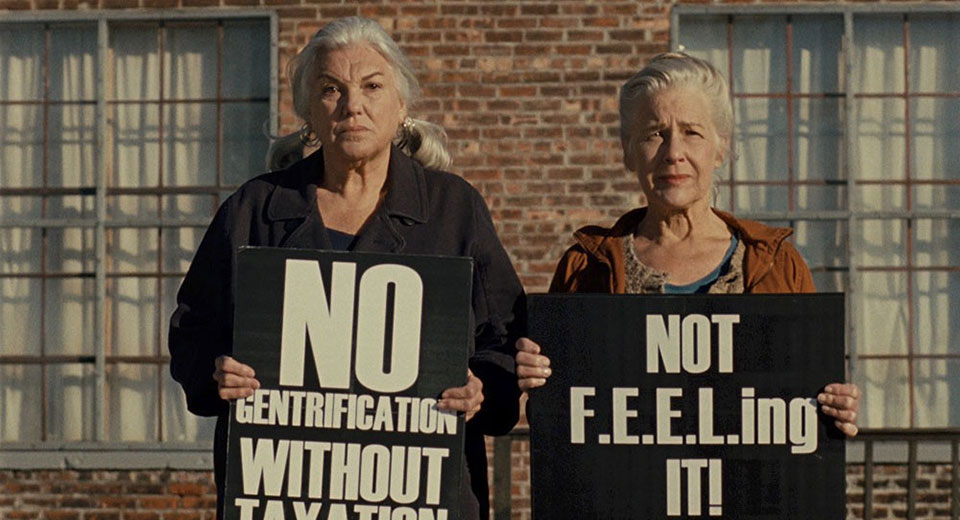 Scathingly critical of the rampant corporate greed that has been eroding community values for decades, yet full of rich characters and warm humanism, Patrick Wang’s A Bread Factory is an amusing ensemble comedy of urgent truths. The Bread Factory, a modest community arts center run by Greta (Elisabeth Henry) and Dorothea (Tyne Daly), is under siege. May Ray, a duo of internationally famous Chinese performance artists, want to steal their funding and funnel it towards the hideous new arts complex they’ve built down the street.

In contrast to the canned applause and empty deconstructive slogans of May Ray — their latest video consists of little more than them yelling “down with the hierarchy of furniture” for 20 minutes — Dorothea and Greta aim to promote a cultural sphere that is familiar and canonical as well as highly personal and filled with local idiosyncrasies. From aging actors touring through town to deliver obscure Chekov spoofs to a tour-de-force production of Euripides’s Hecuba which Dorothea casts by observing people at the local diner, The Bread Factory promotes a pluralistic and intimate notion of art that aims to deepen one’s emotional interaction with the world on a local level.

Wang stages the action in a way that works towards a Rivettian merging of ordinary life and high art. Long unbroken medium shots are deployed as the sole means of coverage for most scenes, tethering the scene’s dramatic rhythm to the natural pace of the performers while also creating something of a clear proscenium where the action unfolds. Later in the film when the rehearsals for the play Hecuba begin to take center stage the dramatic arc of the film gets sidelined and we are forced to look to these performances of Euripides text for further emotional development amongst the characters.

The film’s most cutting commentary comes from the contrast between the deeply engaging art made at The Bread Factory and the shallow, highly-distracting art which is invading the town in the guise of May Ray and the bus loads of tourists suddenly swamping Checkford’s streets. Arriving in garishly bright outfits, welding selfie sticks, and singing cloying, Disney-like songs about Checkford’s supposedly historical parking lots, these tourists pose an existential threat to the peaceful stability of Checkford. In the film’s funniest gag iPhone obsessed out-of-towners terrorize the local diner with tap-dance routines that are oddly synchronized to their screen-gazing, effectively kill any conversation Dorothea or other residents are trying to have.

“They once baked bread here, but now we live in an age of crumbs. But what they do with these crumbs is miraculous and we are lucky to have them,” opines Checkford’s resident theater critic in defense of The Bread Factory towards the end of part one. Effectively made for crumbs and shot in just 24 days, A Bread Factory shines bright in today’s American film scene.