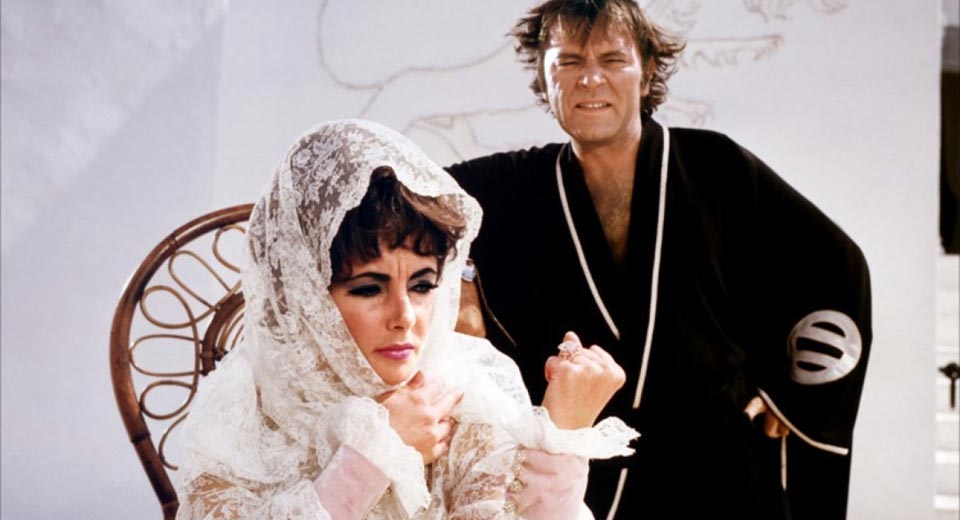 In the sunburnt fugue that is Boom! (1968), Elizabeth Taylor plays Flora “Sissy” Goforth, the world’s richest woman. She has survived five or so husbands and resides on a private island in a manse which Bond villains and Georgia O’Keefe might call comfortable. She surrounds herself with doctors, servants, and dogs, all forced to listen to her memoirs, which she dictates over a compound-wide PA system. She is dying, but looks divine banishing lesser beings from her terrace. She alternates between drunken stumbling and Vitamin B-powered rambles. Richard Burton washes ashore as a mysterious poet with a similar number of dead wives in his wake. He wears a kimono and a sword (provided by Goforth, naturally) for most of the film, which is not a comedy.

Only an artist, or several artists all thinking with the same gin-soaked brain, could produce something so exquisitely risible. Joseph Losey has plenty of good films and bad films in a tumultuous oeuvre, but none defy credulity quite like Boom!. The title comes from Burton’s description of the “the shock of each moment of still being alive,” and at one sublime moment the pair volley the word back-and-forth three times. Taylor’s Sissy Goforth might just as well be called Elizabeth Taylor, sharing as they do a record (at the time of filming) of five husbands and an insatiable taste for finery. The performance remains at 11 as she attempts to seduce Burton, who might be Death himself. In short, Boom! stars a legendarily beautiful actress screeching and throwing bedroom eyes at the personification of Death, who is played by her real-life husband. But Boom! Is also so much more. (Sir Noël Coward also plays himself, more or less, billed as “The Witch of Capri”.) Even the most earnest cinephile or avid “How Did This Get Made?” subscriber can’t adequately prepare herself for this unknowing celebration of obscure excess.