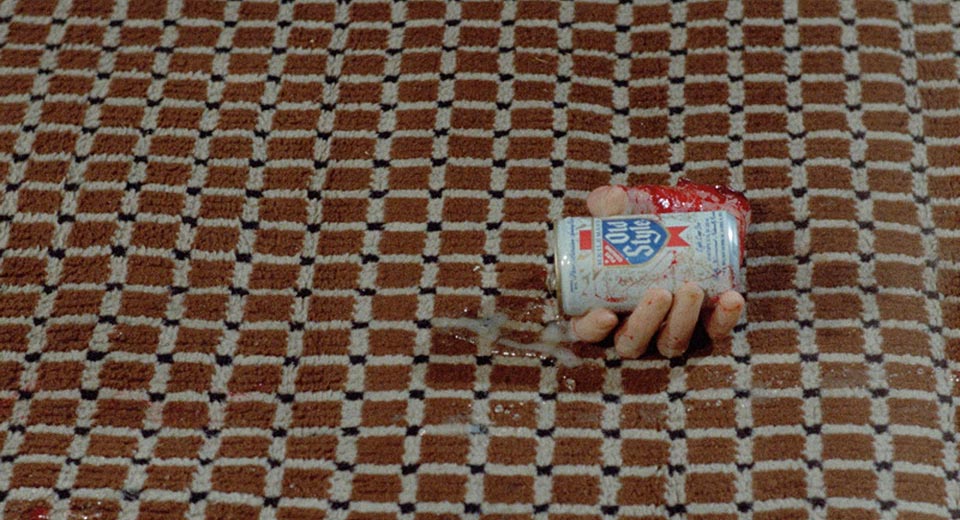 Tonight Spectacle programmer Mark Freado presents Blood Rage at Alamo Drafthouse, whose website rightfully proclaims it to be "the world's greatest Thanksgiving slasher." I'd go even further and call it one of the finest non-franchise slashers of the 80s – one with zero artistic aspirations, yet idiosyncratic enough to elevate it above other under-the-radar splatterfests like The Mutilator.

Blood Rage opens in flashback with a slaughter at a drive-in. In 1974, identical twins Todd and Terry watch as their single mother necks with her date, and, triggered by this primal scene, one of the boys grabs a hatchet from the backseat and slays another couple. Todd is found guilty and sent to a juvenile criminal asylum. Cut to 1984, in the idyllic if questionably named housing development Shadow Woods, as cool jock Terry and his friends prepare to celebrate Thanksgiving. But Terry is unsettled by the news that his twin has escaped detention, and his mother plans to remarry. As the true evil twin – let's be real, it was obvious all along – Terry snaps spends Turkey Day carving his way through friends and neighbors while delivering lines like "It's not cranberry sauce!"

Blood Rage is unbridled gonzo oedipal madness, elevated, above all, by the great Louise Lasser, who goes all-in as Terry and Todd's beleaguered, heavily medicated mother. (It makes a great companion to Susan Tyrrell's performance Night Warning, written up by our own Laura Fischer the other week.) And unlike many self-censoring slashers of the late 80s, which are often far more tame memories serve, Blood Rage doesn't skimp on the gore, which lends itself to at least one indelible image: that of a bloody severed hand on checkered brown shag carpet clutched around a can of Old Style. And what of Thanksgiving? Do Todd and Terry represent the dueling id and superego of the consciousness of a nation founded on colonial violence, which break down under the mental collapse of the ego, the mother? Is the swinging arc of Terry's machete the return of that which is repressed by national myths and codified into ritualistic feast? Or did someone just really, really want an excuse to squeeze that cranberry sauce line in? It's almost certainly the latter, but Blood Rage is no poorer for it.