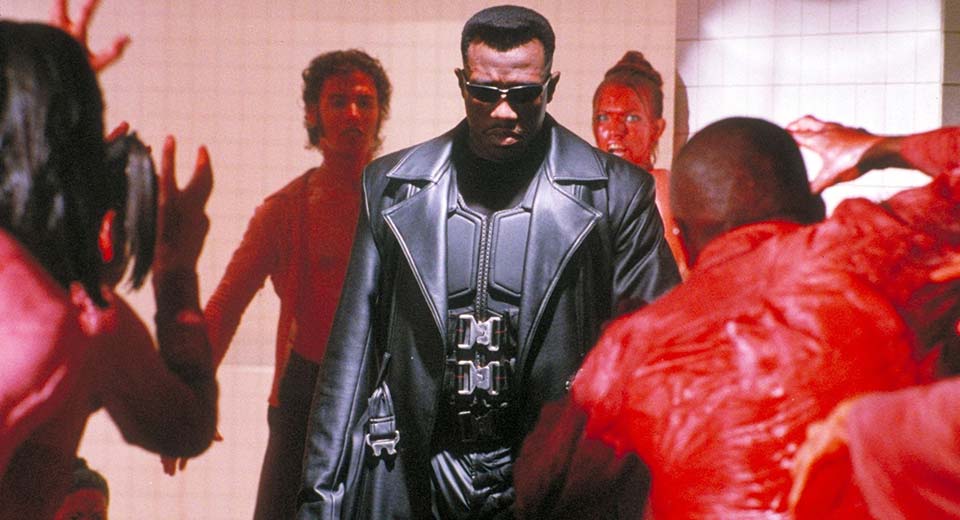 Blade  I and II came out on either side of The Matrix (1999). The first one clearly prefigures The Matrix's aesthetics: techno soundtracks, videogamish slow motion, leather trench coats, and very small sunglasses. Differences are of degree: Morpheus could be Blade ten years later, demoted to an instructor figure like Blade's caretaker Whistler (Kris Kristofferson). The Matrix's cyberpunk is countered by Blade's plasmapunk: syringes instead of floppy disks.

Both Blades follow the same plot: Blade (Wesley Snipes) is a half-vampire who hunts full ones, a marginal sub-breed within the "vampire nation" is conspiring to overthrow the ruling elite (half-bloods in I and mutants in II), and ad hoc alliances with the enemy's enemy end in double-crosses. The vampire theme is exploited for hokey puns ("Bite me, asshole," "Am I that transparent?") and explained in pseudo-biological language. (There's talk about pathogens, neurotoxins, pheromones, and an "accelerated retroviral detox.") The whole exposition has a "red pill" feel to it, where a veil is lifted and the truth behind the myth is revealed. All that stuff about crosses, we're told, is bullshit; only silver nitrate and UV light are effective.

The allegory is pretty blunt. Vampirism is both a disease (explicitly a "sexually transmitted" one) and an addiction. This conjunction can't help but invoke AIDS, especially since the vampires are a subculture whose main hangouts are underground techno clubs. Blade sometimes attempts a kind of conversion therapy on victims, but if they "turn" they must be killed. The infected become organic trash to be swiftly disposed of. Even if they didn't choose to "turn," their right to life is automatically forfeited.

BAM has included the Blade films in its Black Superheroes series, although they do not thematize the black experience to the degree of something like Sweet Sweetback's Baad Asssss Song, also included in the series, which stars "The Black Community" as a whole. The vampires (despite their slavic-sounding language) are ethnically mixed, although aristocrat Udo Kier's German accent suggests a European pedigree (as does the vampire nation's European Health Consortium lawyer). In a 1997 interview, Snipes criticized Hollywood for gladly promoting movies starring aliens or talking toys but not movies with two black leads. Blade II, which features its hero as the sole black lead, made twice the box office—which may seem to either confirm Snipes's claim of Hollywood's prejudice, or suggest that after the first round, audiences were thirsty for more.