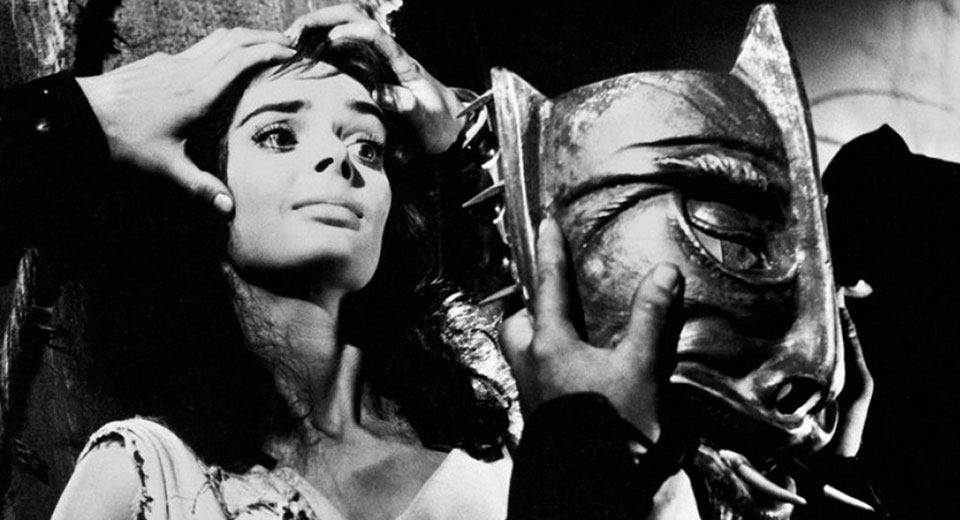 When I first saw Black Sunday (1960) as a teenager, I was enraptured. The opening scene immediately struck me as the platonic ideal of gothic horror: within a fog-soaked cemetery, under a dark sky cracked with lightning and arachnoid tree branches, a Moldavian witch (Barbara Steele in her signature role) is tied to the stake next to her executed lover. Shrouded in black robes and clutching torches, her inquisitors stand by as their leader delivers a final condemnation. With her last breath — for now — the witch spits back at them, “It is I who repudiate you, and in the name of Satan I place a curse upon you!” As men approach with a spiked death mask, she continues, “You will never escape my hunger — nor that of Satan!” A corpulent, hooded executioner draws back his mallet. There’s an inhuman scream, and blood gushes out of the mask’s mouth and eye holes as the hammer thunders down in lingering close-up. It is in the spirit of this shocking and deliciously occult moment that every industrial, doom metal, and witch house band was conceived.

Hopping forward two centuries to the mid-1800s, we find Dr. Choma Kruvajan (Andrea Checchi) and Dr. Andrej Gorobec (John Richardson) on their way to a medical conference when their carriage breaks down in front of the witch’s stygian crypt. Kruvajan swats at a bat, breaking the protective cross above her coffin and dripping blood into her death mask. Outside they meet a young woman, Katia Vajda, who appears to be her exact double. As Gorobec falls for her, her ancient ancestor rises from the tomb and uses her witch powers to summon her lover Javutich (Arturo Dominici). The vampire-zombie-sorcerer duo believe that if they claim the blood of their descendents, they will achieve immortality through the power of Satan, and so they set about terrorizing the village and the family castle in pursuit of their goal.