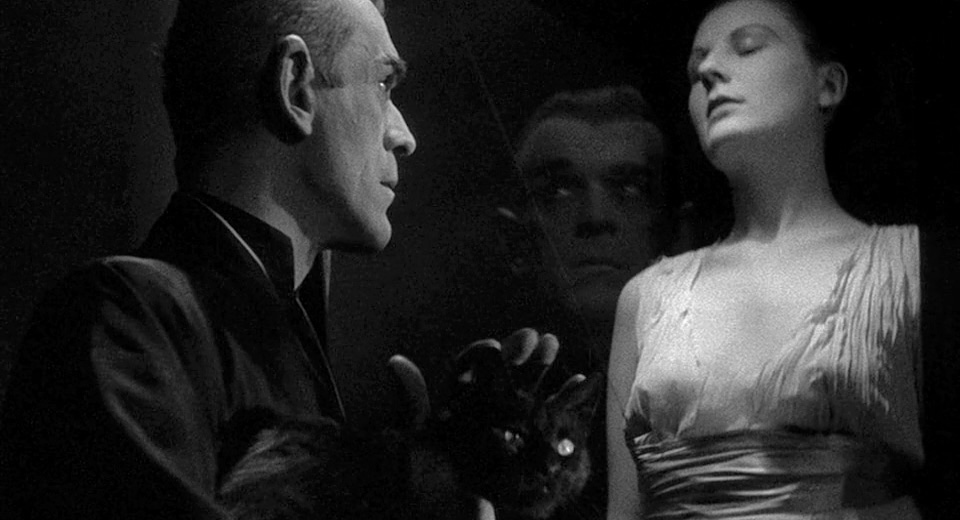 "Come Vitus, are we men or are we children? What use are all of these melodramatic gestures?"  Oracular lines like these, seemingly addressed as much to the viewer or the ether as to another character, drop again and again like little hypnotic bombs from Edgar G. Ulmer ’s 65-minute masterpiece The Black Cat. Ostensibly a B-movie vehicle to put Boris Karloff and Bela Lugosi on the same marquee, the film’s vaguely plotted story (“suggested by the immortal Edgar Allen Poe ”—for publicity purposes only) about a pair of dopey American newlyweds who wind up as hostages to an Austro-Hungarian satanist, architect, and mass murderer, would, in the hands of any other director, have turned out as yet another cut-rate supernatural gag. Instead, Universal Pictures handed the project to Ulmer, himself an Austro-Hungarian and former apprentice to F.W. Murnau, who had a holy kind of predilection for turning schlocky material into pure visual poetry.

The film introduces itself and its perversity with an opening scene of the honeymooners Peter and Joan joking together in their private train car about how hungry they are for…“lunch.” Their conversation is interrupted by Lugosi playing Dr. Vitus Werdegast, a former wartime inmate of a notorious Austro-Hungarian prison—now a psychiatrist—who, within a few hours of their meeting, is caught lightly stroking a sleeping Joan’s soft hair by her puzzled, but not so furious husband. From here the unwitting couple follow the strange psychiatrist, survive a taxi crash in a rain storm, and wake up in a lunatic’s pastiche of a Modernist mansion belonging to Herr Poelzig (played by Karloff), who may or may not have been Werdegast’s jailer, etc. etc. and who now wants Joan to play the bride in his satanic ritual to the full moon.

If it is hard to see the poetry in a summary of the plot it is because you cannot see the poetry. The images describing these characters and scenes are so beguiling and magic and arcane that watching them feels like being lost in wonderland–though a darker wonderland of 1934 haunted by the massacres and suicidal Europe of 1918. There is the knife, the pistol, and the golden key; and then there is Joan, dressed all in white, being dragged to an alter by black-hooded acolytes, or the face of the Tatar-looking bodyguard, or the two cycling policemen—the camera turns them all into secrets. What they mean, or even what they are remains mysterious. But their combination is intoxicating and irresistible, even if it points to brutal memories and dreams of butchery.

Tonight's 35mm screening in the series "The Devil Probably: A Century of Satanic Panic," programmed by Genevieve HK, will be introduced by Screen Slate founder Jon Dieringer.