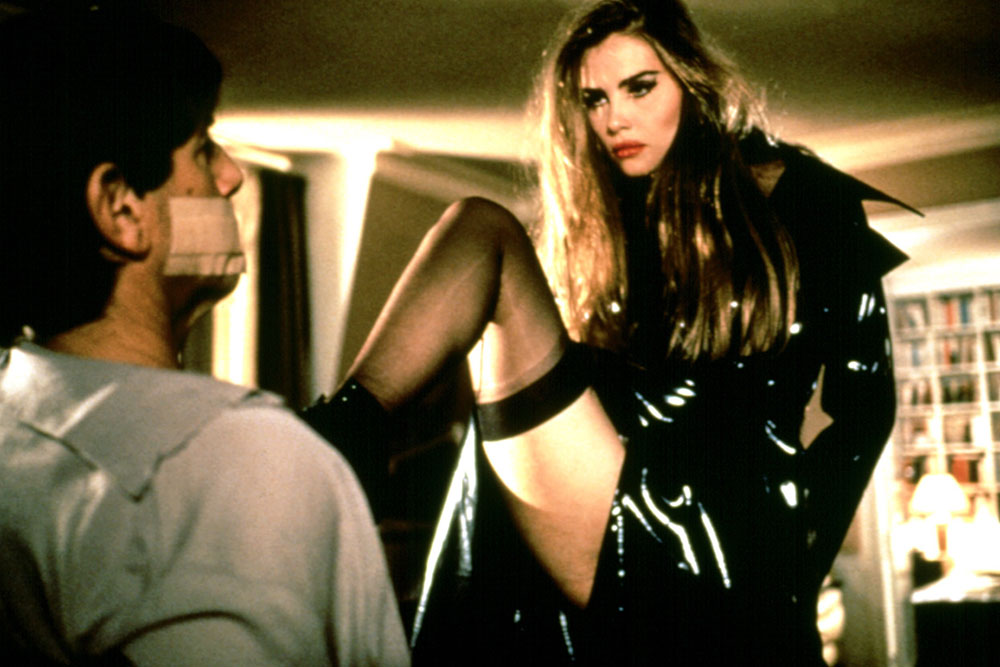 In the deceptively torpid opening of Bitter Moon (1992), we retreat through a porthole from an initial view of the Black Sea, then creep forward until the culminating credit—“produced and directed by Roman Polanski”—coincides with the ring’s perimeter edging out of frame. It’s a fitting entrée to Polanski’s personal take on Pascal Bruckner’s source novel in several ways: as Jonathan Rosenbaum has described, the sequence formalizes the film’s novelistic “tale-within-a-tale” structure, which ferries the viewer between present-tense narration and lengthy flashbacks until the two tracks gradually converge. More crudely, it’s our first taste of in-and-out in a film shamelessly and often comically fixated on sex. But there’s also a revealing resonance with another porthole transition, that of the camera drifting away from the honeymoon rape (also set on a cruise liner) in Marnie (1964). Like Hitchcock’s film, Bitter Moon is an outré psychosexual thriller about pathology and revelation that likens marriage to a form of captivity: bearably domesticating at best and categorically sadistic at worst.

Sailing to India, British couple Nigel (Hugh Grant at his most schoolboyish) and Fiona (Kristin Scott Thomas) stumble across a beautiful albeit vomit-spattered French woman in the deck lavatory. The next time we see Mimi (Emmanuelle Seigner), she’s gyrating alone onstage in the cruise nightclub to Peggy Lee’s “Fever.” The film obsessively reinscribes this dichotomy of frailty and erotic authority as Mimi’s husband Oscar (Peter Coyote), a failed American writer, detects Nigel’s nascent interest and regales him—a reluctantly curious captive listener, our surrogate—with the various chapters of his marriage story, each of which occupies its own generic register: from the soft-focus romance of their chance meeting in Paris and early courtship, to the fetishistic sexual set pieces for which the film is best known (or screencapped), to the couple’s bleak disintegration. The film turns when Mimi accidentally knicks Oscar with his straight razor then lifts her mouth to the wound, blurring any intuitive distinction between intent and misfortune, pleasure and harm.

That the razor, along with milk, black latex, hospital beds, and reaching hands, recur meaningfully throughout the film attests to a fondness for motif at the level of style as well as story. At least twice, Bitter Moon features a back-page ad for an online escort service; we see it plastered across the back of the bus where Oscar first sees Mimi, and again halfway through, when their once-playful roleplay has rankled into the mundane sadism of cruelty and neglect. The ad depicts a nearly headless woman draped in blue fabric, with a caption, honni soit qui mal y pense: an English motto that translates to “shame on him who thinks evil of it,” also sometimes used obliquely to suggest someone is hiding something, or that there’s more at hand than can be seen. Bitter Moon mobilizes both meanings, challenging viewers who might balk at the film’s ambivalent relationship to autobiography—Seigner is Polanski’s wife, costumed to evoke an “almost disconcerting blend of sexual maturity and childish naïvété” fifteen years after he pled guilty to statutory rape—yet also underscoring the extent to which this is, above all, a movie about mystery: cognizant of the ways people, even spouses, especially spouses, remain unknown to themselves and one another.

Bitter Moon screens tonight, August 25, and on August 27, at Roxy Cinema in 35mm. 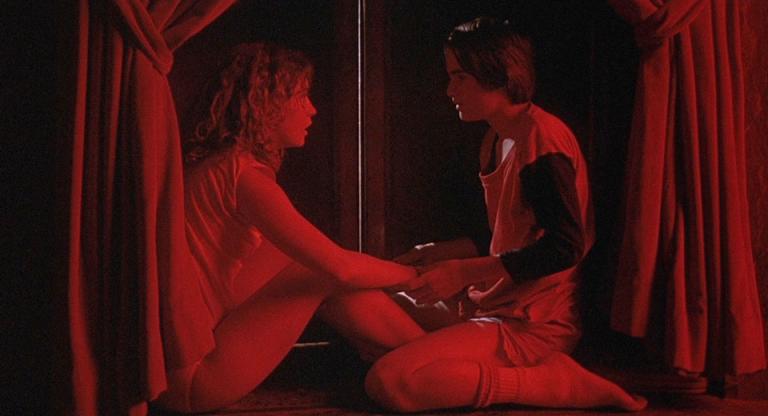