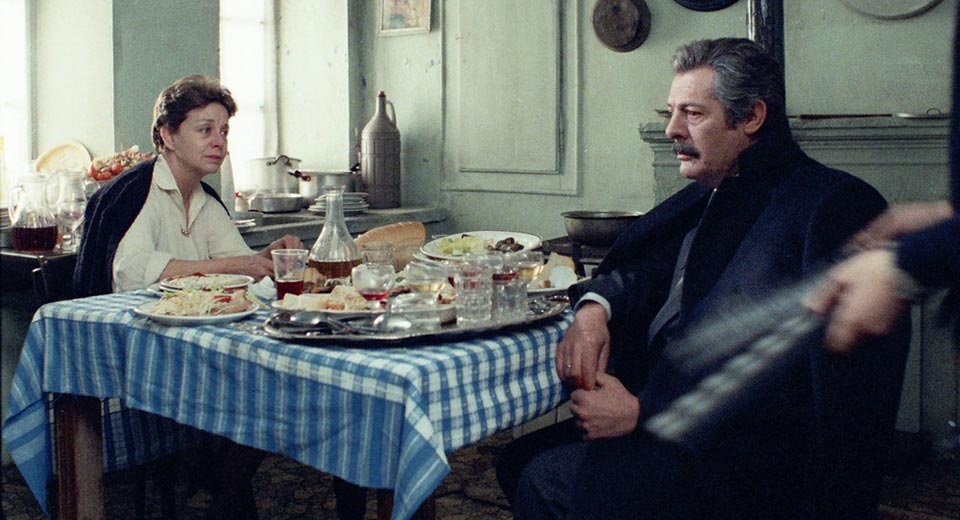 Stripped of all charm, Marcello Mastroianni delivers a haunted performance in  The Beekeeper (1986) the second installment of Theodoros Angelopoulos’s majestic “Trilogy of Silence.” He wears the soul of his performance on woe-struck shoulders and a mystified gaze. With this character, the personification of the sweet life inhabits a man estranged from purpose, having outlived his understanding of the world.

Mastroianni plays Spyros, a newly retired teacher traveling the Greek countryside with a truckful of honeybees in search of the proper weather and blooming vegetation for pollination. In the opening minutes he witnesses the marriage of his youngest daughter while silently ending his own. Along the road, he’s gifted another daughter in the form of a boorish vagabond played by Nadia Mourouzi. Their relationship quickly establishes a pattern: she encroaches upon his solitude and they approach intimacy before she flees back into the arms of rough young men. Sexual tension grows between them alongside failed attempts at communicating shared emotional needs. Despite her apparent bemusement at his reticence, she acknowledges outright that she has nowhere to turn. He can’t muster saying that much, and instead drives his truck through a cafe window to retrieve her.

Abbas Kiarostami once lamented the “efficacious cinema” of cause-and-effect morality and narrative satisfaction. Like Kiarostami, Angelopoulos offered long segments of unbroken time and space as a counter to the Taylorized cinema descended from D.W. Griffith. Mastroianni and Mourouzi move in and out of frame throughout The Beekeeper, as Angelopoulos moves his camera toward and away from them. Each shot generates a sense of its own history, becoming a roving stage across which performers and landscapes ebb and return, carrying the added weight of temporal continuity. The enormity of accumulated time and contiguous space deepens Mastroianni’s isolation while generously providing contemplative space for audiences accustomed to whiplash from breakneck montage and diagrammatic storytelling. As with all of Angelopoulos’ best work, The Beekeeper invites audiences to cast their eyes delicately across every inch of his frame in search of connection.