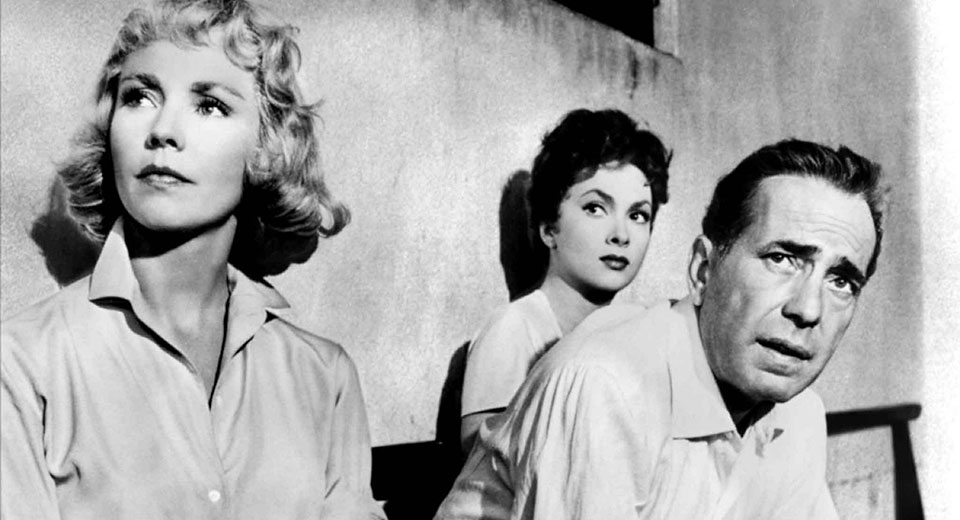 John Huston thought his adaptation of Irish Communist author Claud Cockburn's novel Beat the Devil was going to be a serious thriller, but when scriptwrights Anthony Veiller and Peter Viertel failed to preserve its thrills, Huston turned to Truman Capote. The two of them met Humphrey Bogart in the Italian town of Ravello and together they drank their way to this self-consciously sardonic 1953 caper.

Beat the Devil is considered a spoof of The Maltese Falcon (with both Bogart and Peter Lorre reprising their structural positions), but it feels more like an Italian sex comedy in the mold of Divorce Italian Style, thanks to the bawdy situations involving Gina Lollobrigida’s bust and to the paesino setting. Billy and Maria Dannreuther (Bogart and Lollobrigida) get involved in a get-rich-quick scheme hatched by the exile/expat trio Peterson, Ravello, and O’Hara (Robert Morley, Marco Tulli, and Lorre), who plan to snatch the uranium-rich Central African land holdings of British coffee magnate Harry Chelm (Edward Underdown), who, with his wife Gwendolen (Jennifer Jones), currently happens to be stuck in the very same seaside village.

Most practical questions are ignored by the narrative (like how they would mine the uranium and who they would sell it to), leaving the script free to explore a handful of national stereotypes. Billy stands in for America; Gwendolen keeps grilling him about whether he’s a “typical American,” whom she’s only seen in movies (as, perhaps, we all have), and a North African customs official assumes he knows Rita Hayworth personally. The Chelms are upper crust Brits, associated with immemorial elms, family portraits in great echoing galleries, trout streams and horses. It turns out they’re only pretending to be gentry, that Harry’s not a Gloucestershire squire but the son of Earl’s Court boarding house proprietors, but that doesn’t stop the George Moore-quoting, afternoon tea-serving anglophile Maria from fetishizing him. O’Hara—who claims that in Chile, where he’s been hiding since the war, O’Hara is a common name for German transplants—draws theoretical conclusions from the respective ages of the German and American cultures, claiming that in his country, “a child of six is older in his heart than [Harry] will be at sixty.” Ahmed (Manuel Serano), the hookah-smoking, fez-wearing customs agent, serves primarily to condemn Islamic culture. “In my country, a female’s lips may move, but her words will not be heard,” he says, and “We in this country have 4,000 years’ experience in asking questions and getting answers,” but we never even find out which country he’s talking about. The most cosmopolitan character might be retired Major Jack Ross (Ivor Barnard), a Brit who tirelessly proclaims his loyalty to Hitler and Mussolini, this generation’s last chance at greatness. He also offers a glimpse of what conspiracy theorists might have been like in the 1950s, launching into tirades about the Rosicrucians and the Great White Brotherhood, the “mystic rulers” who now hold mankind’s fate in their hands.

In the opening scene, the studio-wardrobed Chelms walk down a dusty alley discussing the “native labor situation” in Central Africa while a gaggle of Southern Italian adolescents—who seem to have snuck onto the set—follow them curiously and peek directly into the camera. The dissonance between these elements reminded me that in order to show fictional characters plotting to exploit a colonial territory on behalf of an earth-destroying industry, a real Anglo-American crew had to invade this comparatively poor Mediterranean town on behalf of another industry, one that often obscures reality by aestheticizing it.