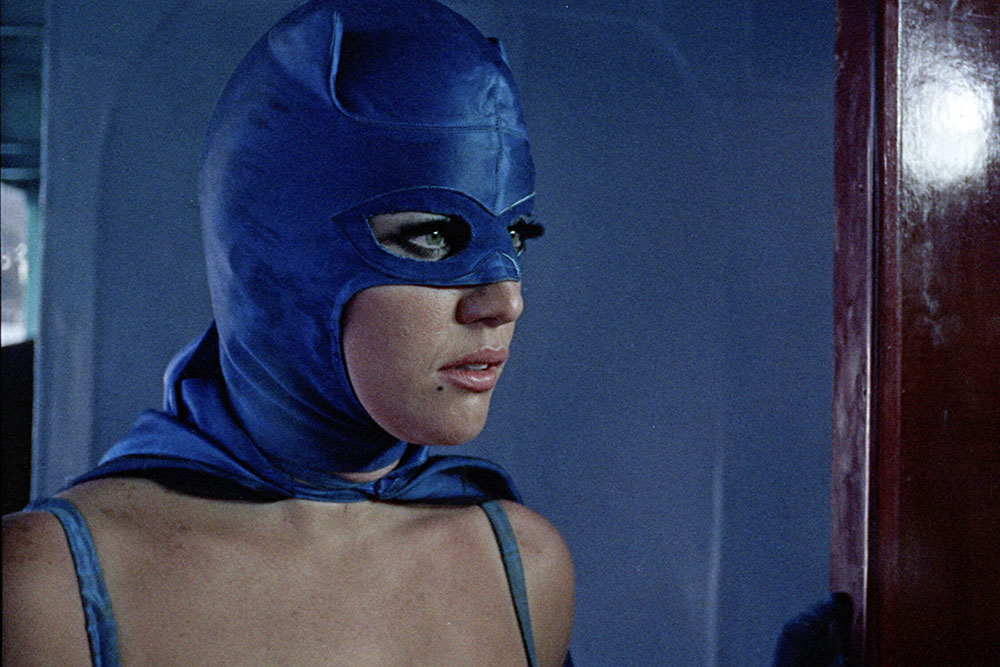 René Cardona’s 1968 caper and sleazy salve The Batwoman sees Maura Monti as a crime-fighting, gun-slinging, scuba-diving superhero recruited by Mexican police to unspool a string of murdered luchadores. The culprit is Dr. Eric Williams (Roberto Cañedo), a screwy scientist harvesting wrestlers’ spinal fluids in order to Frankenstein a Gill Man. “We’ll create the image and likeness of our ancestors—an amphibious, human creature!” he exclaims to his assistant, named Igor, of course.

The Batwoman’s lore is never imparted: She simply glides onto the scene in her signature cape, cowl, opera gloves, and satiny cobalt bikini, a slick embodiment of Batman’s campy origins. When out of disguise, she wears hot pink turtlenecks and drives her Aston Martin to the beach, a kind of continental affluence Bruce Wayne could only envy. The film is an oft-forgotten installment of 1960s Batmania, alongside the concurrent American TV series and 1966 film starring Adam West as the caped crusader, or Andy Warhol’s similarly unlicensed Batman Dracula (1964).

Vivified by his new foil, Dr. Williams decides he’s growing tired of his floppy, gilled men and instead wants to operate on Batwoman, making her the first ever fish-woman. His underwater traps for her scuba jaunts backfire, with the monster he sends after her being doused in gasoline and set ablaze. Where today’s Batman fiddles with shiny, seductive tech, Batwoman is pure brawn, her lucha libre sensibilities put to use in and outside of the arena.

The film’s ethos is celebratory, full of sly references to creature features past and Cardona’s own niches—at one point, we see that Dr. Williams’s boat is named “Reptilicus,” a neat invocation of Sidney W. Pink’s widely (and unfairly) panned Danish wyrm flick. Wading through Batman’s new wave of militarial sexlessness is bleak, but six-foot-tall red carp-men and bikini-clad ass-kicking might be the perfect decongestant for all the obtuse IP grot.

The Batwoman screens this evening, July 31, at the Museum of the Moving Image in a new digital restoration. Archivist Viviana García Besné will be in attendance for a Q&A.