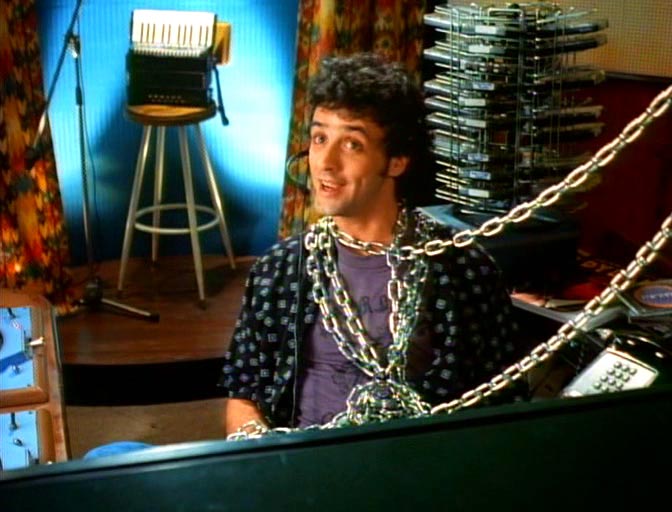 Ted Nicolaou’s practical-monster-fueled, sci-fi comedy assault on ’80s television culture, TerrorVision (1986), offered a tongue-in-cheek answer to the increasingly present, and increasingly prescient, serious cinema narratives about the medium including Network (1976) and Videodrome (1983). It only made sense that Nicolaou, working for the illustrious cult-film distributor Full Moon Pictures, would set his sights on the radio waves just a few years later with the indescribable genre oddity Bad Channels (1992).

The tagline for Bad Channels really says it all: “Killer Music, Alien Airwaves.” As in TerrorVision before it, Nicolaou’s assault on free airspace is decidedly political, but he isn’t interested in making a hamfisted statement film. Rather, Bad Channels sees fit to load up its meager 88-minute runtime with as many musical performances, rubber creatures, and scantily clad people as possible, resulting in a film that feels as much a peer to TerrorVision as it does the cartoon equivalent of something like Pump Up the Volume (1990).

Synopsizing Bad Channels doesn’t do it any favors as it’s inspired blend of genres and specific aesthetics defy any attempts at taxonomy or distillation, but the gist is that an alien lands on Earth, becomes obsessed with human women, and resorts to taking over a radio station – hosted by a Howard Stern–esque shock jock—in order to use the hijacked airwaves to its advantage, including as a shrink ray. It’s an amalgam of Earth Girls are Easy (1988) and Airheads (1994), melding multiple adolescent male fantasies—commandeering a radio station, pursuing young women, performing in an outlandish rock band—into one hard-to-pin-down cocktail.

It may not have as much to say about the reach of radio as Pump Up the Volume, which loudly preaches to its target audience through its lead character, but Bad Channels feels as much or more so the product of the MTV generation. It’s edited like a music video, chock-full of catchy songs from bands you’ve never heard of, and has a vibrant aesthetic akin to ’90s products like Trapper Keeper binders or Bubblicious gum. It’s an uneven experience, sure to prompt headaches or dismissal from the Full Moon Features uninitiated, but Nicolaou is clearly far more concerned with the few people paying attention than the droves running away.