Baby the Rain Must Fall 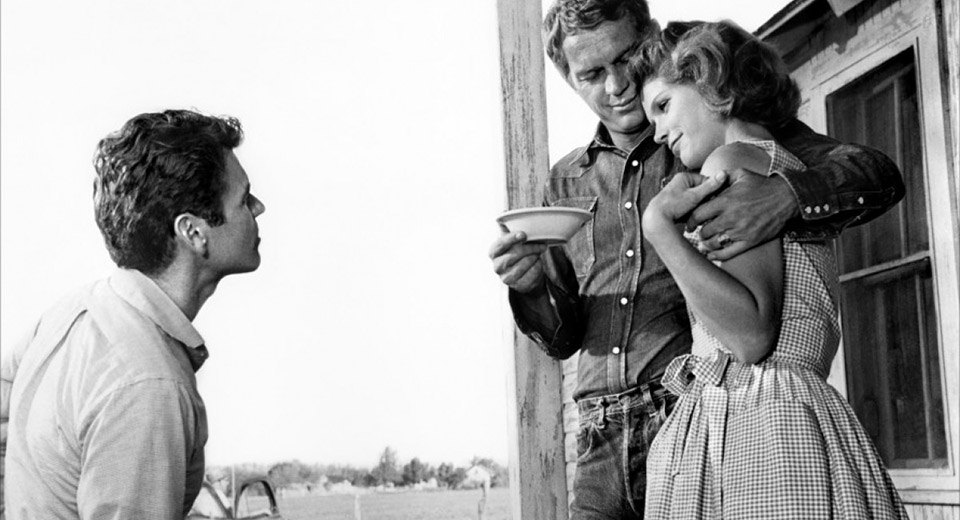 With an impressive lack of urgency, director Robert Mulligan details the blown last chance of a hardluck guitarist in the languorous Baby the Rain Must Fall (1965). This proto-American New Wave character study embodies its purgatorial southeast Texas setting in elliptical dissolves during which endless vistas bear down to swallow stars Lee Remick and Steve McQueen. Mulligan and screenwriter Horton Foote largely deverbalize the source material, Foote’s play The Traveling Lady, in favor of brooding atmosphere and seething closeups. If Terrence Malick made an Elvis film between Badlands and Days of Heaven, it would look like Baby the Rain Must Fall.

McQueen’s Henry Thomas is a thin-skinned brawler who fronts a rock n’ roll “string band” when he’s not incarcerated for stabbing hecklers. Upon his parole, Remick’s Georgette reunites him with their daughter and the trio relocate to Thomas’ hometown, where his childhood friend Slim, now a sheriff’s deputy, keeps an eye on him. Also scrutinizing Thomas’ rehabilitation: Ms. Kate, his abusive adopted mother. A bed-ridden town matriarch, she issues her proclamations through a harried servant and has been given the authority to revoke Thomas’ parole. In search of stakes, the movie has her threaten to send him back to the can if he doesn’t quit his fledgling music career and find a trade. But unlike many onscreen would-be rockers at odds with their folks, Thomas has nothing of the triumphant figure in him. Because Mulligan’s film aims to be more psychodrama than teen crowd-pleaser, Thomas’ hopes for glory are dashed by the capriciousness he shares with the hateful Ms. Kate. Their stalemate in the war for her affection colors his every move.

Mulligan briefly hurls us into Hitchcockian menace and exuberant rock numbers, but the bulk of the film is defined by an oppressive flatness. Scenes end abruptly without divulging exposition or escalating the story’s tension. Similarly, dissolves shift us a few short yards across the Thomas family’s barren lawn with little dramatic motivation. In most scenes, nothing is in a hurry to happen, so we drink in cinematographer Ernest Laszlo’s shadowy closeups for voyeuristically long stretches. Intentionally or not, Mulligan and co. produced an arthouse meditation rather than the red meat initially suggested by the material. It might be more at home onscreen in 2019 than it was five decades ago.