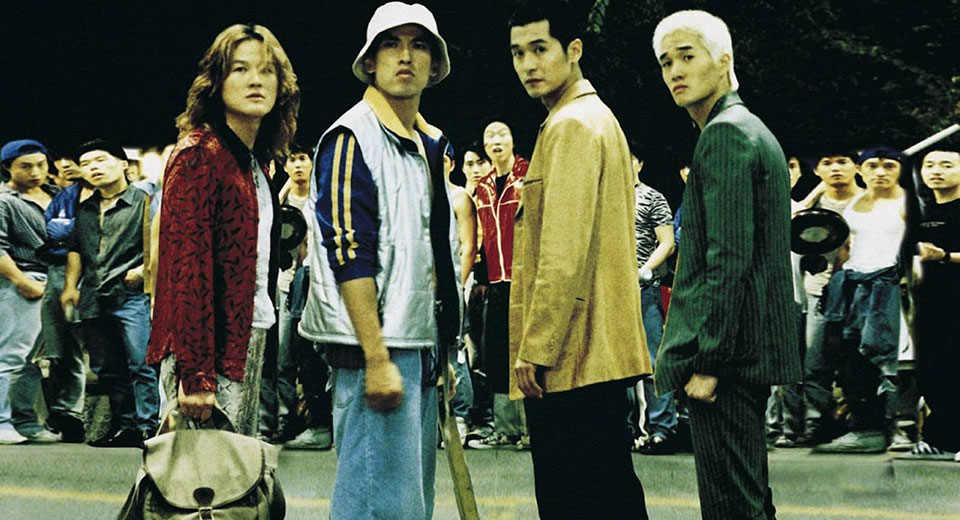 Four stylish punks descend upon a gas station in the opening moments of Kim Sang-jin’s Attack The Gas Station, violently plundering the register and destroying everything they come across. Twenty-four hours later they’re at it again, this time hanging around long enough to take all the employees hostage and mess with the customers. Why do they wreak such havoc? For fun — or at least that’s what the film claims in a clever opening-title card. But leaving aside the film’s edgy late-90’s cartoonish stylings, the name of the game is less simple nihilism than a complex system of failed promises haunting these youths in an increasingly globalized, post-financial collapse South Korea.

Betrayed by the system in different ways, Bulldozer (Yu Oh-seong), No Mark (Lee Sung-jae), Rockstar (Kang Seong-jin), and Paint (Yoo Ji-tae) now turn their modes of oppression back against the ruling order. Forcing the hostages to fight each other and then punishing the loser by forcing them to stand on their head, Bulldozer replicates the same system of arbitrary and demeaning punishments dished out at schools. Destroying the patriotic slogans left lying around the establishment, Paint enacts a form of petty revenge against his professionally minded father who smashed all Paint’s art when his grades started to drag.

As the gang enact their self-imposed justice against condescending customers and corrupt cops, the gas station itself emerges less as a source of capitalist scourge than as a potential site of economic and artistic liberation. When the punks decide to work the pumps themselves after finding there’s no money in the registers, their consensual enlistment into the working world becomes not just a viable option for them to make money, but also assert their autonomy.

Marrying the rough, hooligan attitudes of its heroes with its own glossy, highly-polished, and highly-commercial style the film suggests that global, hegemonic pop-culture is not only the source of their disaffection, but also their road to freedom. When Rockstar asserts “Pepsi is Korean, it’s got the Taegeuk on it” while pointing to the red and blue swirls of the drink’s circular logo, he offers not only a critique of rampant nationalism but a working metaphor for the film’s infectious mix of internationally salient pop-cinema with distinctly Korean social issues.