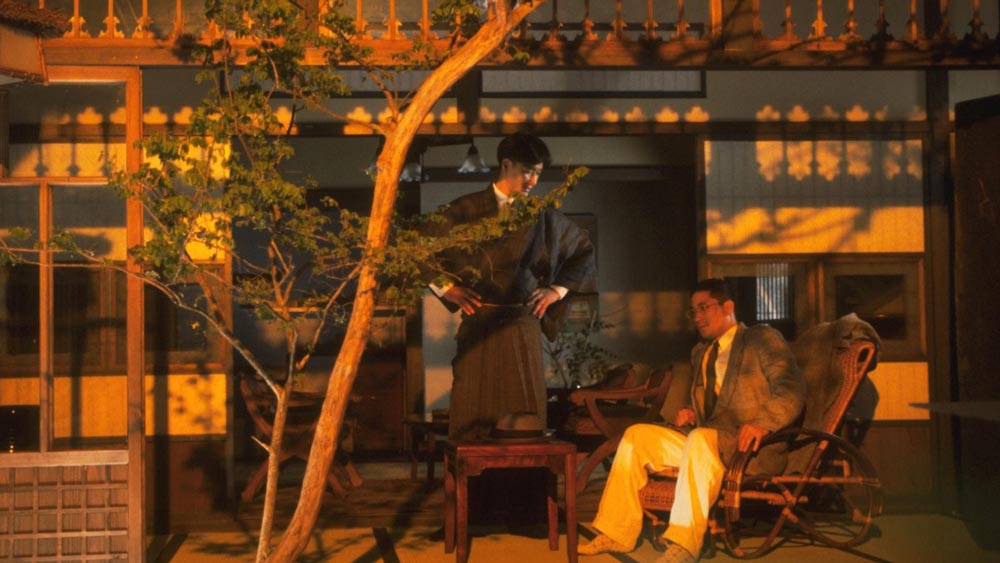 In And Then (1985), Yoshimitsu Morita’s sumptuous adaptation of Natsume Soseki’s novel, it is the twilight of the Meiji Era. Everywhere the effects of Westernization have adhered to Japan, forming a collage of contrasting dualisms—between wooden houses and neoclassical mansions, Confucian obligations and European chivalry, cherry blossoms and white lilies. But the most important distinction concerns the temperaments of individual men: there are those who merely read the news, and those whose actions write it.

Daisuke Nagai (Yusaku Matsuda) is turning 30, and life has sorted him into the former category. He’s unemployed and content to be so, as his wealthy, industrious family pays for everything he needs. They simply hope he’ll one day marry a woman chosen for him and learn to be useful to someone. With hands unsullied by labor, Daisuke has cultivated no sense of urgency or resolve. A former literature student, he pursues activities of the mind, reading books and enjoying music. On the page, Soseki expresses his character by detailing his perspicacious observations of the rapidly-changing world, which he scarcely leaves an impression upon. On screen, Matsuda weighs down his actions with a considered, faltering stillness. At times he’ll suddenly jerk about, as if on the verge of saying or doing something important, then withdraw at the last moment.

There is only one thing that could get Daisuke to change the meandering course of his life. His best friend, Tsunejiro Hiraoka (Kaoru Kobayashi), writes the news—literally, because he’s accepted a position at a newspaper as a finance reporter. He pursued a more practical path by studying economics but is saddled with debts from previous jobs that went sour and neglects his ailing wife, Michiyo (Miwako Fujitani). Daisuke has loved Michiyo since the three of them met in university, and when the Hiraokas move closer to him, it becomes clear that Michiyo has retained complicated feelings for him too. Against his own inertia, slowly, almost imperceptibly, Daisuke builds up a conviction that he will steal the wife of his friend.

The subtlety of Soseki’s novel and the ostentatiousness of Morita’s style clash brilliantly, reflecting the cultural incongruities embedded in the film’s setting. Daylit scenes are often shot lushly and brightly, with the wind breezing through windows and open doors. At night, Tokyo becomes a network of cloistered, furtive spaces; the city swirls into the vertigo of Daisuke’s psyche, with surreal scenes in a train carriage staging the progression of his love for Michiyo. The film’s third act leaves Daisuke’s fate extraordinarily ambiguous, with his family and Tsunejiro still closing in on him. But if he must be remembered as a villain, he can at last say that his story was worth being written.

And Then screens tonight at Film at Lincoln Center as part of their Yoshimitsu Morita retrospective.