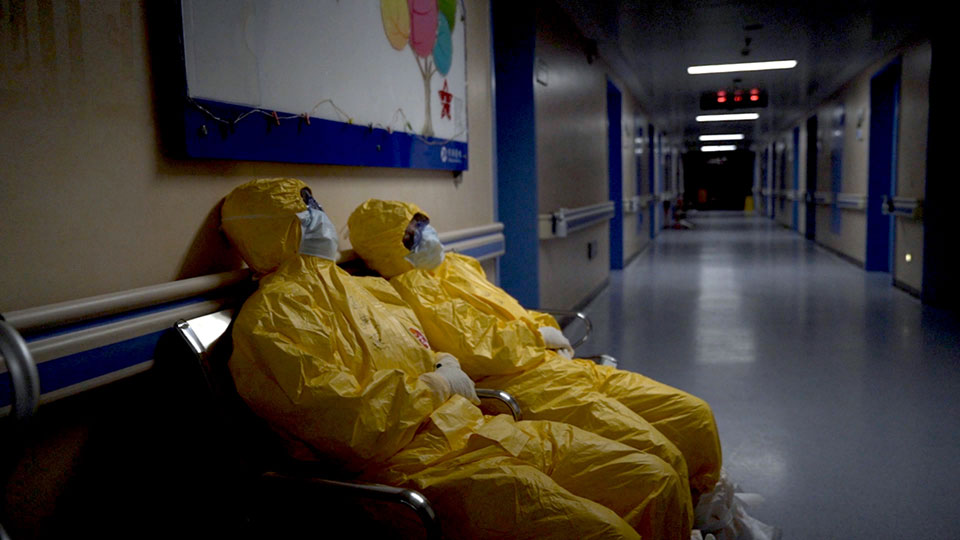 76 Days, directed by Hao Wu, Weixi Chen, and an anonymous Wuhan journalist, documents Wuhan’s COVID-19 lockdown from January to April. The film rarely ventures outside the four hospitals it depicts, nor does it bother to provide much backstory for its largely nameless cast of healthcare workers. This is a portrait of confinement, and how a community sustains hope despite its pressures. The wider world recedes from view, and what remains is an overwhelming sense of immediacy.

Weixi Chen and Anonymous, the directors on the ground in Wuhan, stay close to the action of the doctors and nurses around them. The camera meticulously tracks their movements, pacing alongside them down endless hallways, peering through windows and behind curtains, and hovering over the bedsides of patients. This is footage that feels embodied, shot through with palpable exhaustion. It is easy to imagine the directors clad in the same full-body PPE as their subjects and slumped over the same benches we see many of the hospital workers resting on throughout the film.

Director Hao Wu, who edited the film from New York, counters the fatigue and sterility of its setting with a narrative of families weathering the lockdown, whether together or apart. The film tracks several parallel stories, from a grandfather with dementia who bemoans being kept in his room, to a mother separated from her newborn child, to a son and his parents scattered throughout the same hospital. The use of family as a framing device recalls Wu’s previous film, All in My Family, which explores the conflict between his life as a gay man in the US and the attitudes of his family in China. 76 Days plays out the inter-generational conflict of that film between the younger hospital workers and the elderly patients. Their interactions — sometimes playful, sometimes stern — are often endearing, and at times settle into the rhythm of familial squabbles. The hospital workers also quickly find family in each other as well, personalizing their suits with cartoonish doodles and the names of their favorite foods.

The real foresight of 76 Days is not in serving as a public health PSA or a piece of exclusive frontline reporting, but in preserving the small gestures of care that would otherwise be lost in the grand scheme of events. It’s a moving reminder that we can always provision a family for ourselves out of the people around us, and that we long for the mutual comfort found in caring for parents and children, no matter who they are.

76 Days is currently screening online via DOC NYC (through Nov. 19, with a pre-recorded Q&A with Hao Wu) and the Hawai‘i International Film Festival (through Nov. 29, with a freely available companion Q&A).