Watch the Skies: Ufology on Film 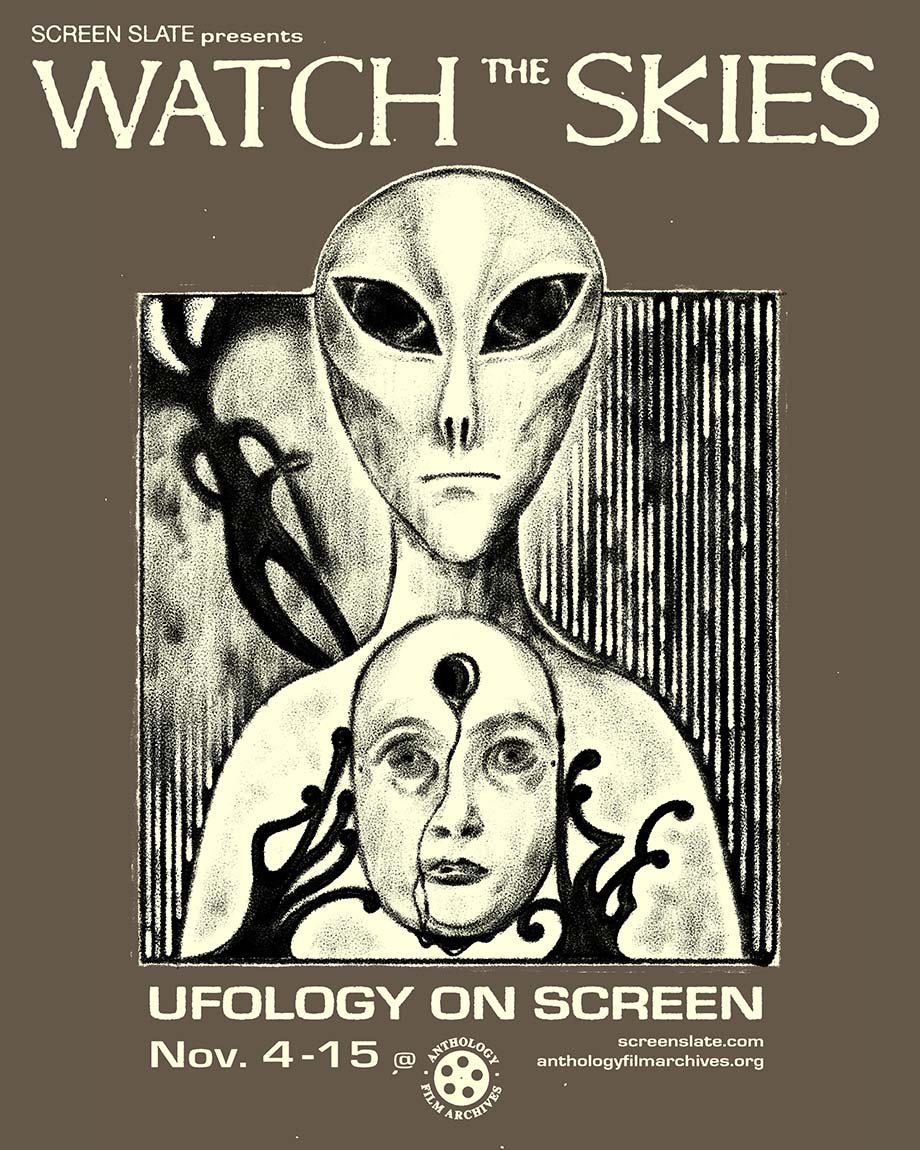 Since the “flying saucer craze” of summer 1947, in which hundreds of reports of strange aerial discs flourished across the United States, UFO culture has occupied a peculiar and constant place in American life. Like many of this country’s favorite pastimes, ufology thrived first as an iconoclastic subculture, and its participants – many of them “experiencers”, dilettante investigators, and truth-seekers, made to look silly by mainstream media – fashioned fringe networks through DIY or less-than-venerable avenues such as Xerox newsletters, tabloid reports, AM radio shows, drugstore paperbacks, motel room conferences, and Usenet forums. WATCH THE SKIES considers an array of films and videos that have emerged from this subterranean movement, ranging from underground videotapes to Hollywood blockbusters, and encompassing the stories of motley characters from contactees, renegade scientists, and New Age mystics to conspiracy cranks and shifty opportunists.

Though spacecrafts have long been a staple of science-fiction magazines, Buck Rogers serials, and alien invasion B-movies, Steven Spielberg’s CLOSE ENCOUNTERS OF THE THIRD KIND (1977) might very well be the ur-text for cinematic explorations of the phenomenon’s social dimensions. Drawing from the research of prominent ufologists J. Allen Hynek, the astronomer hired by the Air Force to develop a typology of sightings, and Jacques Vallée, a French computer scientist and basis for François Truffaut’s character in the film, Spielberg used the UFO as an alibi to spin a domestic fairy-tale skewering suburban hang-ups and spiritual yearning. Subsequent films pursued the expanding directions of inquiries into the phenomenon, including Alan Ruldoph’s filmographic outlier ENDANGERED SPECIES (1982), a paranoiac procedural based on Linda Moulton Howe’s investigations into cattle mutilation and so-called “black helicopters”, and UFORIA (1985), a small-town satire of UFO religions.

The genre perhaps reached its zenith in the early ’90s, with the dawning of the new millennium in sight and a hint of apocalypticism in the air. Philippe Mora’s COMMUNION (1989), an adaption of paperback horror novelist Whitley Strieber’s best-selling real-life visitation account, and Robert Lieberman’s FIRE IN THE SKY (1993), a reconstruction of the purported abduction of Arizona logger Travis Walton, set a standard for “based on a true story” ventures, delving into the psychological residuals of encounters. THE X-FILES can be credited with bringing many of the more outré, conspiratorial elements of the culture to popular audiences, and its 1998 theatrical film (subtitled FIGHT THE FUTURE) borrowed generously from far-flung demagogues like Milton William Cooper, a former fixture on the UFO circuit whose libertarian screeds were gaining traction with the growing militia movement. George Kuchar’s opus SECRETS OF THE SHADOW WORLD, meanwhile, documents the high strangeness of the waning days of the 20th century through a diaristic portrait of the filmmaker’s circle of eccentrics, among them Strieber and noted paranormal researcher John A. Keel.

Selections in the series are paired with shorter-form interventions into the genre by a roster of artists and collectives: Kuchar explores the folkloric dimensions of UFOs in his portrait of Vallée, THE TOWER OF THE ASTRO-CYCLOPS (1994), and Kevin Jerome Everson investigates three sightings over Mansfield, Ohio, in IFO (2017). Cauleen Smith’s H-E-L-L-O (2014) adapts the five-tone extraterrestrial greeting from CLOSE ENCOUNTERS into a New Orleans funeral procession, and Peggy Ahwesh deconstructs the semiotics of UFO millennialism in HEAVEN’S GATE (2000-01). Stalwart guerrilla media collective Videofreex experiment with luma keying in the LANESVILLE UFO INCIDENT (1976), and Vertical Blanking (ia Kamadula and Michael J. Masucci) weave a harrowing study of alien abduction and generational trauma in DEPOSITION (1991).

Due to the ephemeral and sensational character of the UFO phenomenon, a panoply of conflicting explanations and interpretations emerge from these movies. Are these sightings evidence of extraterrestrial beings, an elaborate government psychological operation, or the machinations of two-bit hustlers? Are these the collective projections of America’s sublimated anxieties of foreign invasion, ecological disaster, post-industrial sprawl, or widespread social alienation? No consensus will be reached, though some cinephilic viewers might find some kinship with these stories of ineffability and compulsion: fleeting lights in the night skies and the obsessives drawn to making sense of them.

Programmed by Tyler Maxin and Jon Dieringer, and presented by Screen Slate. For more info about Screen Slate visit: www.screenslate.com/