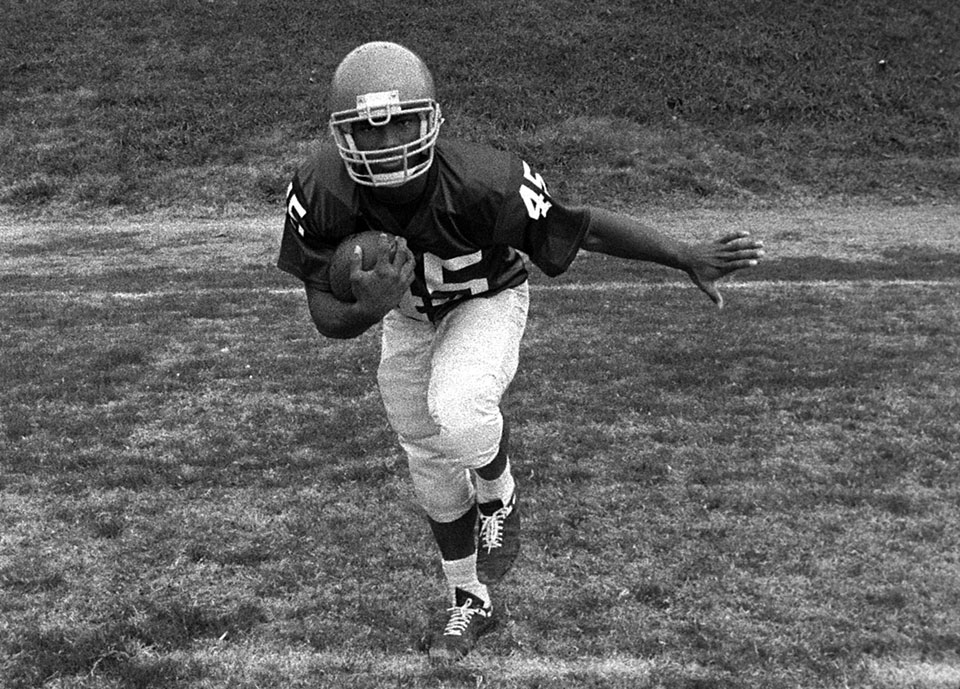 Inspired by Samantha N. Sheppard's new book, Sporting Blackness: Race, Embodiment, and Critical Muscle Memory on Screen , this program – the first of Canyon Cinema’s relaunched (Virtual) Salon series – brings together an assortment of experimental sports film and video that evince themes and concepts from Sheppard’s trailblazing study. Both her final chapter, on the revolt of the (cinematic) Black athlete, and this screening are anchored by Haile Gerima’s incisive, underseen 1971 film, Hour Glass, about a basketball player disillusioned with his profession. The program will be introduced by Canyon Cinema executive director Brett Kashmere and concludes with a conversation between Sheppard and fellow cinema scholar Michael Boyce Gillespie.

Three female gymnasts complete a series of accent gestures, removing the actual gymnastic stunts from their routines. Exploring what may be perceived as an unintentional queering of feminine identity within a rigidly heterosexual culture, Gymnasts highlights the athletes' combination of high femme appearance, fierce individualist athletic prowess, and affects of team work. This “queering,” or subtle disruption, is found in the contrast between gymnasts' bodies (masculine in form: narrow hips, broad shoulders, highly developed musculature) and their feminine presentation (make up, pony tails, bows).

Fastest Man in the State tells the story of a pioneering group of African Americans who integrated the University of Virginia’s athletic program during the 1970s. Much of the film centers on the experiences of Kent Merritt and Harrison Davis. Through scripted training exercises and drills, the film celebrates the visual beauty of athletic competition.

This short video explores, through a collage of images, text, and voice-over, some of the issues raised when Black athletes are called upon to “represent” what have been historically seen as ‘White’ nations, within the international sporting arena; juxtaposing nationalistic heraldry and the heroic imagery found in public monumental sculpture with the bodies of two young Black athletes. Through referencing historical legacies of the disenfranchisement and exclusion faced by Black people, the piece examines how the transition of the Black athlete from the periphery to the center of the nation’s psyche carries with it a network of contradictions and limitations.

“A young African American male rethinks his role as a basketball player for white spectators as he begins reading the works of Third World theoreticians like Frantz Fanon, and contemplates the work of Martin Luther King Jr., Malcolm X and Angela Davis. Highly metaphoric rather than realistic, Haile Gerima’s ‘Project One’ (an early student film project at UCLA) visualizes through montage the process of coming to Black consciousness.” (Jan-Christopher Horak)

Sporting Blackness examines issues of race and representation in contemporary sports films, exploring what it means to embody, perform, play out, and contest blackness on screen… Through a provocative and interdisciplinary approach, Sheppard argues that representations of Black sporting bodies contain ‘critical muscle memories’: embodied, kinesthetic, and cinematic histories that go beyond a film’s plot to index, circulate, and reproduce broader narratives about Black sporting and nonsporting experiences in American society.

Since 2014, Canyon Cinema’s Salon series has provided a free, informal platform for dialogue and engagement with moving image artists. In the past, these events have taken the form of artist-led screening-and-discussions, staged in an intimate setting (16 Sherman Street, in San Francisco’s SOMA neighborhood). Expanding into the digital space due to the current necessity of physical distancing, we have further opened the forum to scholars and curators to present their research alongside experimental cinema and media artworks. The Canyon Cinema Salon series is made possible with generous support from the Hobson/Lucas Family Foundation and The Andy Warhol Foundation for the Visual Arts.

Kevin Jerome Everson, born in Mansfield Ohio, is Professor of Art at the University of Virginia in Charlottesville. Recipient of the 2020 Berlin Prize, the 2019 Heinz Award in Arts & Humanities, and the 2012 Alpert Award in Film/Video, Everson's eleven features and over 180 short films have been the subject of solo retrospectives and exhibitions at festivals, museums, biennials, and film archives. His collaborations with UVA colleague Claudrena N. Harold include eight shorts to date.

Haile Gerima is an independent filmmaker and professor of film at Howard University in Washington, D.C. Born and raised in Ethiopia, Gerima emigrated to the United States in 1967. Following in the footsteps of his father, a dramatist and playwright, Gerima studied acting in Chicago before entering the UCLA School of Theater, Film and Television, where his exposure to Latin American films inspired him to mine his own cultural legacy. After completing his thesis film, Bush Mama (1975), Gerima received international acclaim with Harvest: 3000 Years (1976), an Ethiopian drama that won the Grand Prize at the Locarno Film Festival.

Michael Boyce Gillespie is Associate Professor of Film at The City College of New York, CUNY. His research and writing focuses on film theory, black visual and expressive culture, popular music, and contemporary art. He is the author of Film Blackness: American Cinema and the Idea of Black Film (Duke UP, 2016); co-editor of the “Dimensions in Black: Perspectives on Black Film and Media” dossier for Film Quarterly (Winter 2017); and co-editor of Black One Shot, an art criticism series devoted to black visual and expressive culture on ASAP/J (the open-access platform for Association for the Study of the Present Journal).

Claudrena N. Harold is a professor of African American and African Studies and History at the University of Virginia, Charlottesville. She is the author of The Rise and Fall of the Garvey Movement in the Urban South, 1918-1942 (Routledge, 2007), New Negro Politics in the Jim Crow South (U of Georgia P, 2016), and When Sunday Comes: Gospel Music in the Soul and Hip-Hop Eras (U of Illinois P, 2020), and co-editor of The Punitive Turn: New Approaches to Race and Incarceration (U of Virginia P, 2013).In 2013, Harold started collaborating with her colleague and filmmaker Kevin Jerome Everson.

Keith Piper is a British-based artist and academic. His creative practice responds to specific social and political issues, historical relationships, and geographical sites. Adopting a research driven approach, and using a variety of media, his work has ranged from painting, through photography and installation to a use of digital media, video, and computer-based interactivity. He currently works in the Fine Art Department at Middlesex University, London.

Macon Reed is a multi-disciplinary artist whose works probe the notion of optimism through queer and feminist lens, examining the lines between transformation and failure, trauma and healing, playfulness and escapism. Drawing on rituals of normative enculturation with regard to team socialization and competition, her work interrogates the limits of optimism and the point(s) at which cheerfulness becomes self-destructive, with a specific interest in physical performance and sculpture. Athletes as performers, as stand-ins for different waves of feminist conversation, Reed is interested in contrasting representations of a femme aesthetic within a media-based portrayal of feminine presenting bodies.

Samantha N. Sheppard is the Mary Armstrong Meduski ’80 Assistant Professor of Cinema and Media Studies in the Department of Performing and Media Arts at Cornell University. She writes extensively on black cultural production and production cultures (e.g. Cinema Journal​, Film Quarterly, Journal of Sports History, L.A. Rebellion: Creating a New Black Cinema, and Black Camera). She is the author of Sporting Blackness: Race, Embodiment, and Critical Muscle Memory on Screen (U of California P, 2020) and co-editor of the anthologies From Madea to Media Mogul: Theorizing Tyler Perry (UP of Mississippi, 2016) and Sporting Realities: Critical Readings on the Sports Documentary (U of Nebraska P, 2020).

Canyon Cinema Foundation is a 501c3 tax-exempt organization dedicated to educating the public about independent, non-commercial, experimental, avant-garde, and artist-made moving images. We manifest this commitment by nurturing scholarship and awareness with public programming at universities and nonprofit cultural organizations worldwide.