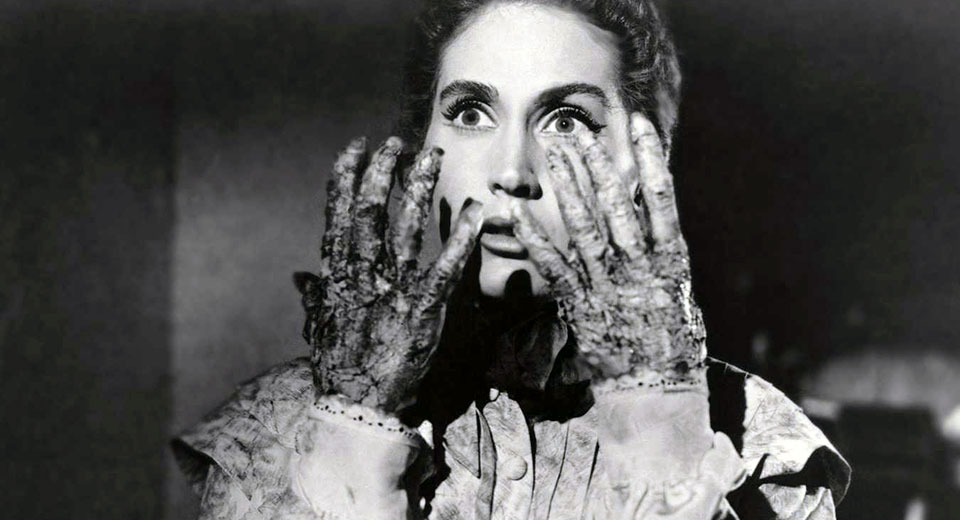 Had some poverty row bottomfeeder given Edgar G. Ulmer three days to distill Hitchcock’s Rebecca (or Suspicion , take your pick) to its psychosexual essence on borrowed sets with Peter Lorre in the lead as Dr. Frankenstein, the result would have resembled The Witch’s Mirror (aka El espejo de la bruja, 1962). In this horror-sci-fi-gothic-occult jewel from Mexican genre director Chano Urueta , a housemaid ( Isabela Corona ) engages the dark arts to exact revenge on a murderous surgeon ( Armando Calvo ) and his young wife. In the guise of a mysterious cabal of hellish deities to whom Corona’s smirking Sara pledges her services, the occult here acts as a somewhat fussy force of righteousness counterbalanced against the hubris of a mad scientist. In a very un-metal twist, Sara’s demons answer to a shadowy bureaucracy of decision-makers, but they nonetheless honor her devotion with supernatural assistance.

The film’s most spectacular special effects are the histrionic performances delivered by each actor, from the three leads down to the few shouting bit players. Together, they sustain Colin Clive’s orgasmic “It’s alive!” line reading from James Whale’s Frankenstein for the duration of the film, forming a coven of fevered intensity that suits the artifice of the sets and plot as well as the brisk running time. The commitment of all involved to a clunky script of salvaged parts elevates material that has often faltered beneath the languid weight of literally thousands of uninspired adaptations.

The massive mirror of the title more resembles an extra-dimensional realm than a flat reflection a la Snow White. As Sara gazes into the magic gateway for answers, the film puts her castmates directly on the other side of the mirror’s frame. The witch looks directly at her oblivious counterparts, and Corona pretends that there’s a sheet of glass separating them. This low-rent effect makes the entire conceit creepier, as if Sara has a visceral clone of the world bottled up for her amusement. To complicate things further, the film later uses rear projection, double exposures and broken sightlines in the mirror image, fashioning a corrupted reflection rather than a magic surveillance camera. But these are only a few of the gonzo flourishes that make The Witch’s Mirror such a surprisingly exhilarating time at the movies.