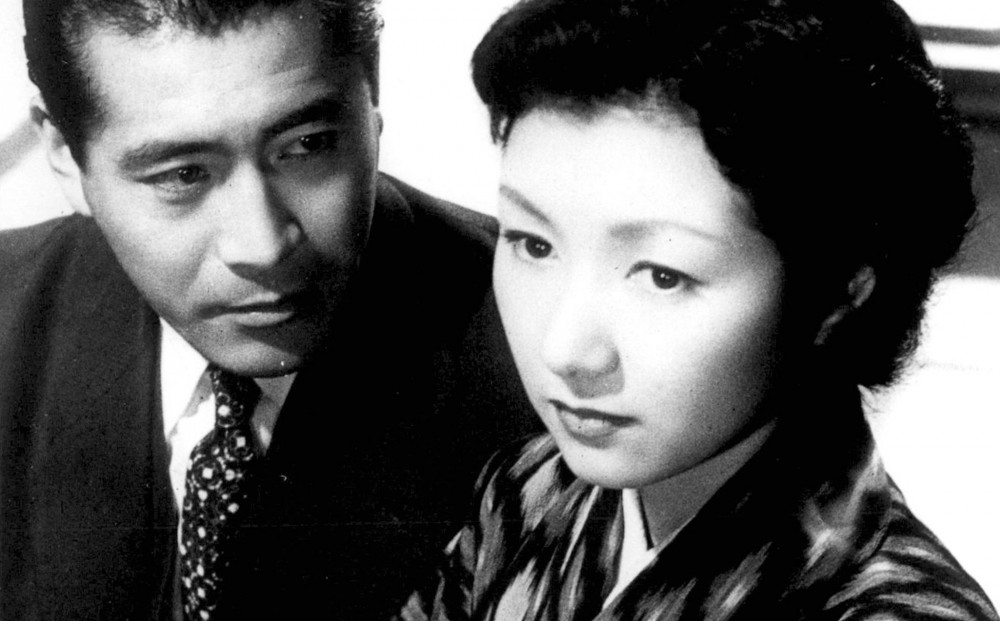 Women in the films of Mikio Naruse walk sapped cities and fading villages, tend to errant children and peevish in-laws, arrange meetings and meals and marriages, toil for stopless hours as bar hostesses, geisha, and uncompensated mothers, sisters, daughters, and wives—when they’re not scudding between side gigs or grasping at some meager scheme to better their lot—and yet they never, ever seem to get anywhere. In Mother (1952), starring Kinuyo Tanaka as that archetype of self-sacrifice, I cannot recall once seeing her character sleep or even sit down. The fugitive joys of her daily life drown in the drudgery required merely to live. Many of Naruse’s masterpieces, like Floating Clouds (1955) and Yearning (1964), crest into some irrevocable rupture, a symbolic or actual death that pauses the perpetual motion of subsistence, however briefly. But other of his films mourn the impossibility of such a release, the mundane fizzle of a pot that fails to boil. When fervor deadens into dull routine, what is there to do but continue?

Often the woman in question is played by Hideko Takamine. A former child actress, in her adult career she swapped girlish pluck for a reflexive slouch and a palpable sense of pinioned passion. Her early effervescence lingered on as a buried trace of something mislaid, perhaps forever, by circumstance and time. According to an age-old rumor, it was Takamine who directed Akira Kurosawa’s attention to the handsome, out-of-work photographer’s assistant who would become his colossal avatar: actor Toshiro Mifune, the focus of Film Forum’s spectacular paean, co-presented with the Japan Foundation, comprising thirty-three films, most on 16mm or 35mm prints, including the splashy samurai epics that dominated his screen persona. But among all that boisterous swordplay and seedy noir murmurs Mifune’s softer, but subtly sharp-edged, Takamine-Naruse collaboration, A Wife’s Heart (1956).

In fact, Mifune does not appear until about twenty minutes in and even then remains scarce. Yet the film is animated by his gravitational charisma, stirring up a vigorous undertow that ripples an otherwise cool, steady surface. Strolling suavely into the restaurant where Kiyoko (Takamine) has apprenticed herself as waitress and cook, he obliquely prefigures Wong Kar-wai’s charged close-up of Tony Leung Chiu-wai, in Chungking Express (1994), as a lovelorn cop entering the snack bar where Faye Wong bops along to the Mamas & the Papas. (Soon enough she disquiets his heart.) Mifune portrays Kenkichi, a bank clerk helping Kiyoko to negotiate a loan necessary to open a café in the space adjoining the declining apothecary that she manages with her husband, Shinji (Keiju Kobayashi). The tone of her marriage is brisk and dutiful, like stiff shorthand between coworkers. Rarely do she and Shinji share the same frame, except at thresholds, moving in contrary directions. But with Kenkichi she turns heliotropic, beaming and angling toward the warmth of his sunny disposition as he regards her with tender concern.

Their few scenes together float apart from their surroundings like islands of cherished contentment. Presently home transfigures into, in Kiyoko’s words, a “pincushion,” the domestic honed to a dagger point: Shinji’s older brother (Minoru Chiaki) slinks back defeated from Tokyo with wife (Chieko Nakakita) and child in tow and, after tugging at the heartstrings of their acid-tongued mother (Eiko Miyoshi), wheedles the couple for some of the cash intended for the café in order to salvage his own career. Brother and matriarch, now tentative allies, corner and cajole whichever spouse happens to be around: Shinji seeks respite from this acrid atmosphere by sulking in an okiya, while Kiyoko vents her troubles on sympathetic rambles with Kenkichi. The viselike pressure preys on the couple’s mutual detachment; alone, they’re vulnerable.

Naruse stitches together the cuts in A Wife’s Heart from punctuating glances: wry, furtive, anxious, sardonic, desolate, longing. Moments of fellowship or transgression generally transpire offscreen, including a death that brutally reflects an alternate fate for Kiyoko’s marital woes. Emotions materialize instead through lost buttons and misplaced nail clippers, through the grating echo of a bouncing ball, through crumbs brushed attentively from a shoulder, through Ichiro Saito’s penetrating piano score, and through the rain that falls and falls and then, before desire overflows into speech, ceases. Tellingly, Shinji’s mother has served as a community matchmaker for decades and preens, in one scene, that just a handful of the pairs she’s shepherded to the priest have since parted. Yet her own newlywed daughter sullenly wonders whether a relationship’s strength can be measured by duration. How can we interpret endurance before regular blows other than as defeat? And it’s that compulsion toward equilibrium that entraps Naruse’s would-be lovers, while they squander their fleeting intimacy in silence. That we can proceed down a narrow path despite visions of a life lived otherwise is terribly, serenely tragic.

A Wife’s Heart screens this afternoon and this evening, February 14, as well as on March 7, at Film Forum on 35mm.