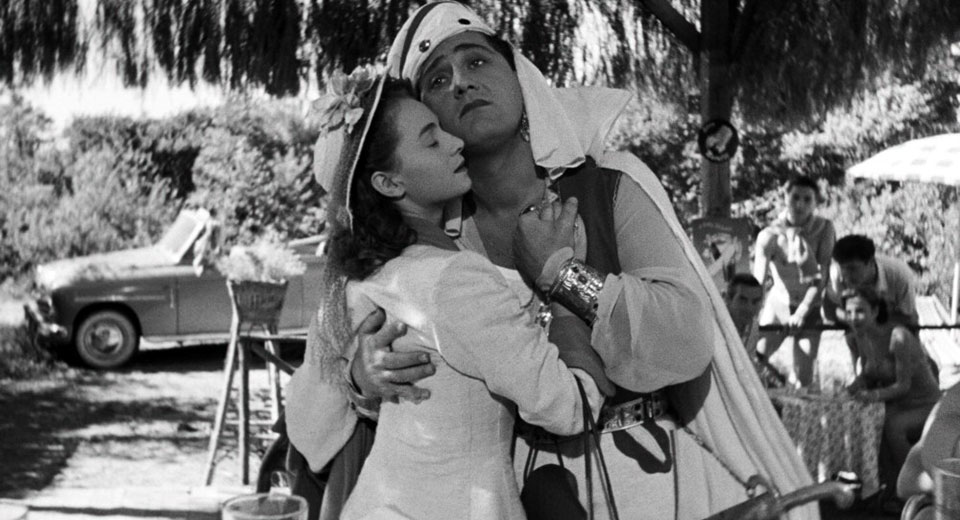 The White Sheik, Federico Fellini’s first solo feature as director, follows a newlywed couple on their honeymoon to Rome. Their overwhelming arrival into the big city establishes a sense of apprehension: Ivan (Leopoldo Trieste) gloriously exclaims “Rome!” as the train arrives onto the platform, and soon he’s swept up within the confusion of the city and muffled by its cacophony.

The ensuing series of events defeats Ivan’s intended strict schedule for the visit. His young wife Wanda (Brunella Bovo) escapes as soon as she gets the chance in order to meet her idol, the fumetti (photo comic) star who portrays a character called the White Sheik (Alberto Sordi). Meanwhile, Ivan must invent excuses to cover her absence to his relatives over the course of the day.

Though riddled with anxiety, the film remains extremely humorous. In one scene, Ivan repetitively kisses each of his relatives, mistakenly also embracing a random woman standing nearby. Fellini’s mockery of bourgeois estrangement and his prominent use of repetitions elicits silent slapstick comedy, reminiscent at times of Chaplin.

It’s significant that this is Fellini’s first feature, as if there’s something of himself portrayed in this small-town character finding himself overwhelmed. The appearance of his wife Giulietta Masina as a prostitute named Cabiria, who in an evocative scene tries to console the poor Ivan, inspires Fellini’s later film Nights of Cabiria. It also displays the self-reflexiveness of later films like 8 ½: when Wanda asks, “How will the White Sheik end?” the fumetti star responds “Why would you want to know? It would ruin the romance of it.”