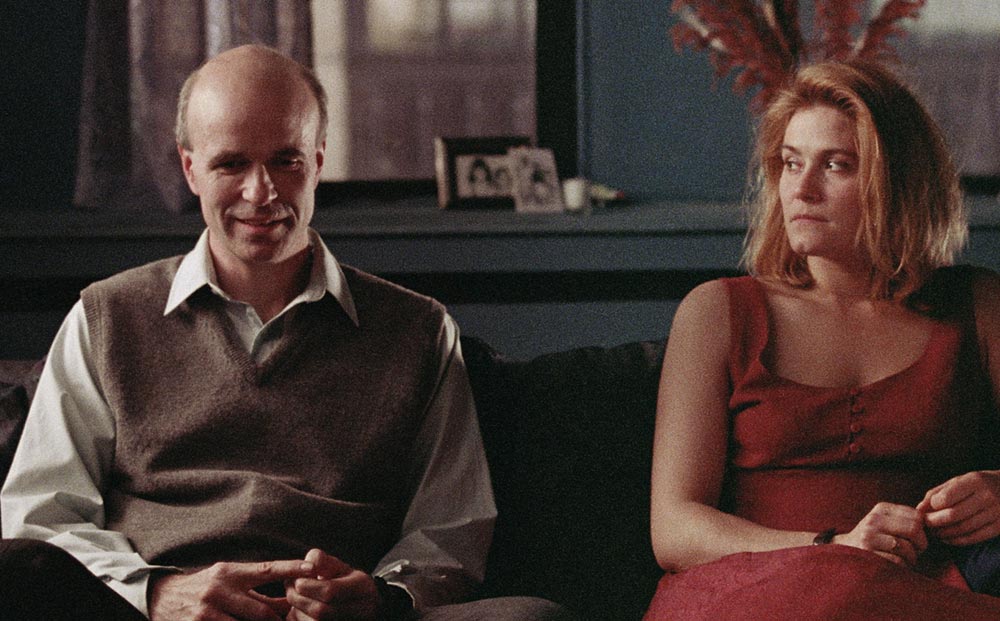 After filming his incredible turn as a messianic drug dealer in Robocop 2, the gigantic and velvet-voiced character actor Tom Noonan wrote a play. A few years later he adapted it for the screen, directing himself and costar Karen Sillas in What Happened Was… (1994) a largely forgotten triumph from the margins of the mid-90s Sundance boom. Financed by Noonan’s salary from the Arnold Schwarzenegger vehicle The Last Action Hero (1993), the film is a miraculous autopsy of a first date, capturing perfectly the sustained tension in which attraction summons an entire cosmos of possibilities wound tightly and squeezed into the persona of an unsuspecting partner who’s nonetheless doing the same.

On a Friday evening, Sillas’ Jackie hosts Noonan’s Michael for microwaved scallops and cake in her spacious Manhattan studio. They work for the same law firm, as an executive assistant and paralegal, respectively. She’s come to admire his supercilious attitude toward their amoral superiors and he’s all too happy to be admired by someone further down the ladder. Both are feeling the squeeze of adulthood and its winnowing path. She feels abandoned by her wild youth; he’s slumming it professionally in order to write an expose on the corrupt American legal system. In the apartment they confess all this while drinking slowly, with each glass loosening certain inhibitions while strengthening various insecurities. In real time, they shed assumptions while forming new theories on what’s beneath the other’s facade.

The opening act is a chase of sorts, with Jackie and Michael swapping roles as pursuer and pursued while decamping from the sofa to the kitchen to the dining room and back again. They awkwardly clarify which comments were meant in jest, and unintentionally offend one another in between lulls and false starts. Likeability fails as a metric for the two characters, who are as lonely and flawed as just about everyone you know. Still, a tension grows. With every exposed vulnerability, Noonan’s script tightens its grip, threatening a grisly release. A paradox often neglected in American cinema holds that the lower a movie’s stakes, the grander its reach. What Happened Was… plays coy with its stakes, hinting at familiar mayhem while delivering something more quietly devastating.

What Happened Was... is now playing in virtual cinemas