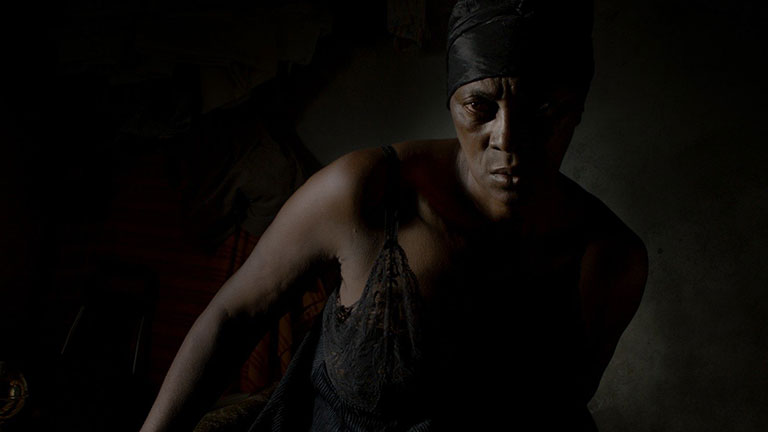 The films of director Pedro Costa build on each other stylistically and thematically to create a haunting, haunted world. In Vitalina Varela the eponymous actress reprises her semi-autobiographical character from 2014’s Horse Money, now expanded to starring role (and earning her a co-writing credit). Vitalina Varela is a neutron star: tenebrous, weighty beyond its small scale, drawing us into its formidably still orbit. Glacial pacing dilates Vitalina’s resentment, sadness, and confusion to fill entire scenes without saying a word, and the film’s sense of lingering despair outside time will feel familiar to those following Costa’s works, but Vitalina Varela offers something new.

The film opens with an ominous still shot of a high-walled road, eventually peopled with Fontainhas townsfolk returning from Vitalina’s husband’s funeral. A palsied priest, played by Costa collaborator Ventura (Colossal Youth, Horse Money, Centro Històrico) collapses, his strength and faith deteriorating even as we watch. Vitalina’s arrival in Lisbon has the ponderous gravitas of Greek tragedy as she disembarks to a chorus of cleaning women aligned on the tarmac. They warn Vitalina to turn back, but in traveling forward she’s already let her past life crumble; there’s nothing to go back to. She’s here and that’s what is.

The constant, densely layered sounds of life all around Vitalina highlight her isolation amid the crowded favela. A shot of his bloodstained bed doesn’t contradict friends’ talk of profuse vomiting towards her husband’s end, but the disparity casts a sinister pall over slivers that never cohere. Vitalina’s search for any sense of her husband’s life their 25 years apart leads her to Ventura’s priest. It’s less Unstoppable Force and Immovable Object so much as Unplaceable Anguish meets Paralyzed Despondence in the shell of a church he lives in. Ventura tries excusing away her husband’s abandonment with talk of how hard a life of work is for a man; he’s not wrong and the evidence is apparent as he wobbles throughout town. But Vitalina’s bitterness at bearing the same and more comes through when she tells him, “You look in a coffin at a woman’s face and you can’t imagine her suffering,” a double condemnation. Vitalina’s tangible, radiating pain is a something thrown into the growing void Ventura can’t face; he eventually joins her.

Shot with the rich browns and deep shadows of a Rembrandt, the film remains claustrophobically dark until the very end, contrasting laboring under the Cape Verdean sun on the life Vitalina thought she was building, with the light finally shining on the life she finds herself in, connecting with Fontainhas (and her husband) at last.