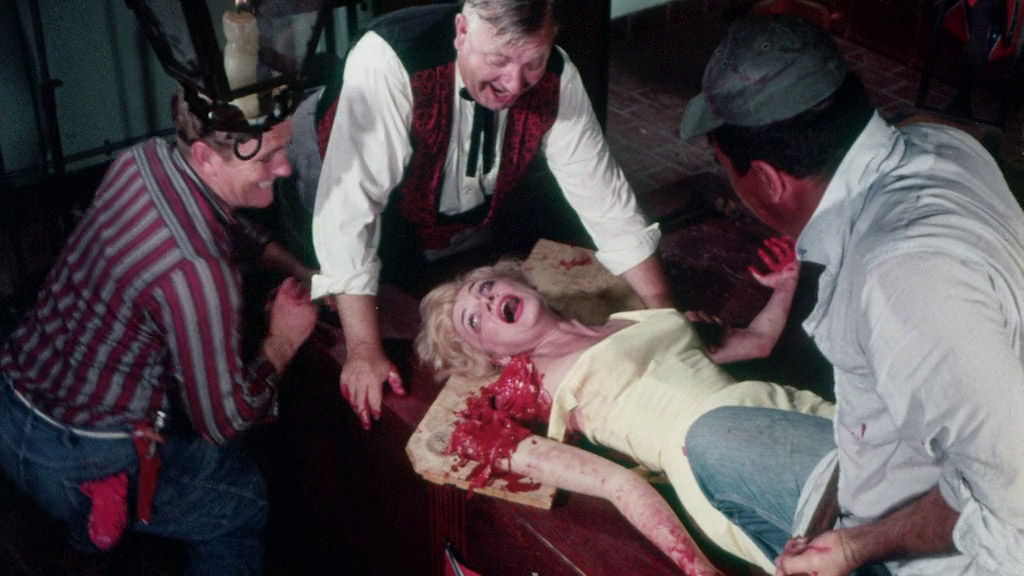 The sensational trailer for Two Thousand Maniacs! (1964) warns viewers that scenes in the preview will be so disturbing that those with young children are advised to leave the theater. Starring 1963 Playmate Connie Mason and "gruesomely stained in blood color," Maniacs seems an unlikely film to reveal the experience of race in the USA as we encounter interlinked pandemics. However, context is everything, and I was introduced to the sanguine cinema of Hershell Gordon Lewis when the film screened as part of A Time for Burning: Cinema of the Civil Rights Movement at Brooklyn Academy of Music. This festival outlier, about the centennial return of a repressed and vengeful Confederate town, is a kind of Brigadoon for Crackers. (The film is loosely based on Alan Jay Lerner and Frederick Loewe’s musical, adapted for the screen by Vincente Minnelli in 1954.) As Confederate monuments tumble, Lewis’s frantic caricature of culture below the Mason Dixon Line resonates, shocks, and amuses anew.

Two day-tripping couples followed by a red convertible with another motorist and a hitchhiking professor follow a detour into the village of Pleasant Valley, where residents festoon the main street with “rebel” flags in preparation for a two-day celebration. Coaxed by syrupy southern hospitality, the six young white guests of honor soon learn their significant roles in the macabre festivities. Happily for horror fans of color, the only black character in the film is a cat (who is, alas, summarily and symbolically dispatched by a child with a noose).

The weird spectacle of a mob of townsfolk (played by nonprofessional actors of all ages, denizens of St. Cloud, Florida) enacting blood-thirsty bigotry anticipates the insular, hillbilly, southern gothic, and folk horror subgenres of the 1970s. This includes films such as The Texas Chain Saw Massacre, Deliverance, The Wicker Man, and Let’s Scare Jessica to Death, while also echoing early social justice dramas like They Won't Forget (1937), in which the terror of lynching is deracinated.

The revelers are silent after each celebratory and increasingly grisly torments of the hapless Yankees before a jaunty, banjo-strumming trio, the Pleasant Valley Boys, who enliven them playing tunes like “Dixie” and the opening credits earworm “The South Is Gonna Rise Again,” composed and performed by Lewis himself. Despite the cartoonish torture inflicted on the outsiders, the images of jubilant crowds are cinematically reminiscent of real-life citizens photographed attending lynchings for entertainment and shared as souvenir postcards. Retrospectively, the release of Maniacs in March 1964 is an eerie predecessor to the disappearance and murder of three Freedom Riders, New Yorkers Michael Schwerner and Andrew Goodman, both white, and Black CORE member James Chaney, who were found buried in a mud dam in Mississippi three months later in June of 1964.

Ultimately, Two Thousand Maniacs! doesn’t make a strong socio-political statement, as the backstory of six rogue Union soldiers who massacred and burnt down Pleasant Valley is revealed, making it a story of vengeance on Northerners rather than a indictment of white supremacist violence that the South used to maintain chattel slavery that continued suppress Black liberation into the era of civil rights and beyond.

At the film’s conclusion, the maniacs joyfully anticipate the arrival of the next centennial, 2065, suggesting that a ghostly Confederacy coexists unseen alongside our democracy. The re-emerging spirits of Pleasant Valley wave their Confederate flags signifying southern intransigence and terror, possibly now redesigned as the blood red and white MAGA hats that blight the current political landscape.