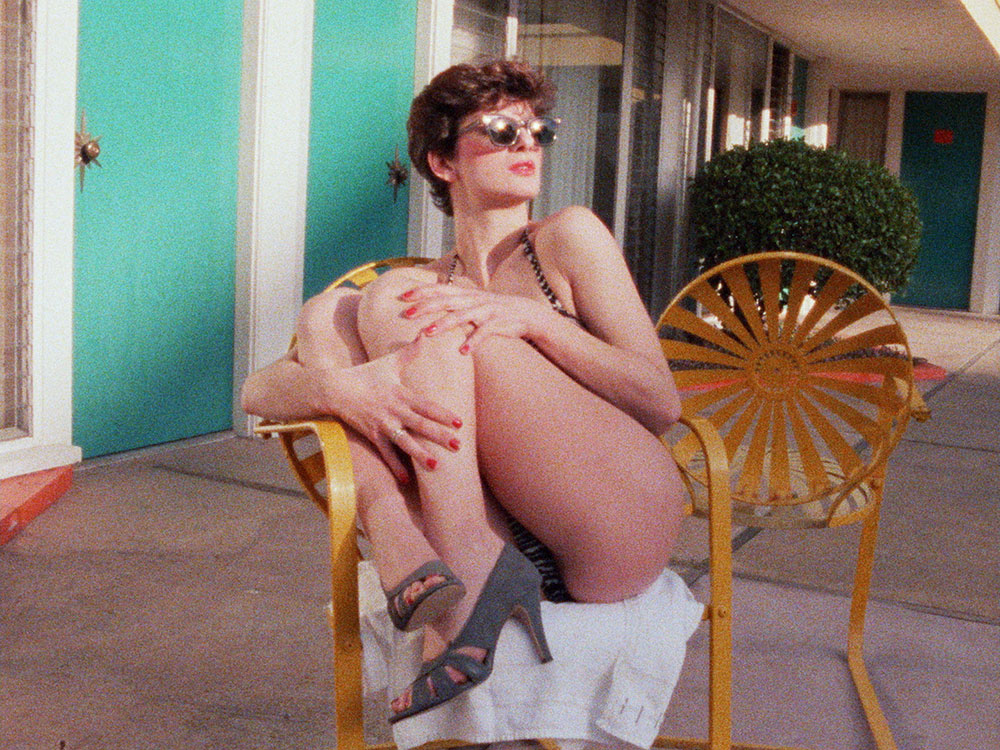 Kamikaze Hearts is a major work from the period immediately preceding the more well-known (and more marketable) New Queer Cinema of the ’90s. Yet, due to its taboo subject matter, difficult-to-categorize nature, and checkered release history, it never attained the sort of canon status that films like Desert Hearts (1985) and Parting Glances (1986) have. Kino Lorber’s new 2K restoration of Kamikaze Hearts is finally giving the film the audience it has long deserved.

I spoke with Bashore in advance of tonight’s screening at Nitehawk Williamsburg, where she’ll be joined by star Jennifer Blowdryer. Our conversation has been edited for length and clarity.

EP: How did the idea for Kamikaze Hearts first come about?

JB: I had been an intern on a film called Television: the Enchanted Mirror (1981) with this filmmaker, George Csicsery. And after that job ended, one day he called me up and he said, “Do you want a job working on a feature film?” And I said, “Yeah,” thinking, Oh, this is the promised land: you get an internship, and that leads to a job, and then your life is set.

But it was also illegal. Porno movies were illegal at that time. I needed the money, so I continued to work. But I had in mind that I needed to be doing research for a project to rationalize my dabbling in the underworld. Then I met Tigr and she had this fantasy of doing this film about Sharon Mitchell, this woman she was obsessed with. And so the two ideas—my idea of doing like an absurdist, almost ethnographic study and her idea of doing this homage to this woman that she was in love with—just came together perfectly. And that’s how it started.

EP: I’ve seen the film described and classified as being many different things over the years, so I was wondering: how would you describe it?

JB: I can't believe that! Do you still run into that? Oh my god, they want the voiceover. I had that exact experience! My first cinematographer took me aside— And he was this newsreel cinematographer from back in the day. You know, a total commie. He took me out and said, “Listen, you have to go out and get cutaways of women being exploited and point to them, and then have a voiceover about how this is the exploitation of women that you're seeing now.” And he ended up quitting because he saw that it wasn't gonna go down that road. Left me without a cinematographer. But it's hard to believe that you still run into people, not like that, but still wanting those kinds of formal conventions. Wow.

EP: The point of my film is that it's anti-nostalgic. It's looking at how people look at these films as documentary, but they're not—they’re fantasy.

JB: So interesting. That's exactly right. God, you're really cutting down into the nerve of it when you say that.

EP: The whole point of this genre is that you’re seeing the real thing, but everything surrounding that is fantasy—real people are having real sex, but they’re playing characters in a fake narrative. And I feel like your film does that same sort of thing, too.

My film is about the layers of fantasy that surround that. It's not about the the pornographic image so much as it is [about] all the layers, this other kind of striptease that's going on, this psychic striptease. And one thing that I wanted was for straight men to go see this film with the expectation that they were going to see like the cum shot or something and then instead get delivered this other kind of thing that they weren't prepared for and weren't expecting and be, in a way, confronted with this other kind of transgressive behavior that wasn't going to be titillating in that same way.

JB: And yet at the same time, they're totally high out of their minds in that scene. So is that even legitimate? And if it is, then it's the ultimate in self-delusion, but we never really know. It’s still vacillating on that kind of pinpoint of realness or not realness. But yes, exactly. That's what I wanted. The raincoat guys, I wanted to get up their ass with that little bit of reality, instead of what they were expecting.

JB: You know, it was a blend. Mostly that crew thought that they were shooting pickups for a feature that really was being made somewhere. And that’s why there was no full complete script; there were just these disjointed scenes that didn’t add up to anything. The reason for that was just because they’re not actors.The guy playing the director, he knew that it was fictionalized. That was George Csicsery, the guy I did the internship with. The actors of course knew because I said, “Look, you guys don't have to have sex.” But they had sex anyways, like in that rape scene, they’re actually fucking. That was completely unnecessary, but they felt— I guess they were method actors or, you know, Stanislavski.

I mean, it wasn’t for any reason of being deceptive. It was just a method for directing them. I just wanted a backdrop, a background, of a film being made, and I didn’t wanna go in and micromanage people for certain shots. I just wanted to let this old-school documentary guy loose with that as a backdrop.

EP: Although the film was mostly scripted, were there any unplanned moments that made it in?

JB: Everything was a mix of planned and unplanned, so I'd have to go through the film in my mind. [In] the interview at the very beginning, there's this sort of montage sequence where Mitch is being interviewed on the stage at the strip joint. And I ask from the audience, “What's your next movie gonna be?” and I ask her, “Is it more truth or more fiction?” And that was completely spontaneous. That was completely on the fly. That was unplanned. And that worked out great.

God, you know, the shooting up scene— “This was my dick . . . ” That was not planned. That was just pure Mitch. We were going in pursuit of the great love scene in a lot of those scenes, now that finally Tigr had Mitch and there was a camera there. They were gonna do the great love scene, and they could never pull it off. So there's a whole series of scenes in a row where they're like foiled attempts to shoot a love scene. That's kind of the opposite of what you're talking about, but those are spontaneous in the sense that they didn’t come to fruition. And then ultimately we had to have a final scene. We had to do something. So, I had to go out and cop the dope for them to get high. So we at least had that scene. And I mean, that is the love scene. Yes, absolutely. We had to have something. We had to have a cum shot, basically.

It’s weird because it took on that almost porn-like form where we had to get this final scene, no matter what. And I guess we thought that they would maybe turn it into a love scene if they had drugs and if they were shooting up because, as it turns out, in their personal story they never were lovers unless they were getting high. So their lovemaking was inseparable from the drug thing, except for that first time. I didn't know that they weren’t actually lovers in the traditional sense, but that’s sort of the underlying thing of the whole film. The whole thing was a kind of facade. Even the fact that they were lovers was a facade that Tigr had fallen for.

EP: I think one of the really kind of great things about the restoration is that you can actually see the blood in the syringe during that scene, which I never did before. So it’s like, “Oh, yeah, this is real.”

JB: I never did either. I saw that she boots the needle and you can see the blood there. I just saw that for the first time myself. That’s crazy, that’s exactly what I was thinking when I saw it. And that was exactly my thought: this is indisputably real. That’s the blood. There’s just no question about that.

EP: One last thing I wanted to mention: as I was leaving one of the screenings I did in Austin a few months back, I overheard someone say, “This is the hottest audience I’ve ever seen here before,” which I think is a great compliment.

JB: [laughs] Oh, that is really good. Yeah, wow. That is a great compliment. Wow. That's like a line . . . “The audience for this film is hot!” If that’d been one of those slug lines they put on the poster, that would really get people in.

Kamikaze Hearts screens tonight, July 19 at Nitehawk Williamsburg in a new digital restoration. Director Juliet Bashore, actor Jennifer Blowdryer, and producer Heather Buckley will be in attendance for a Q&A.